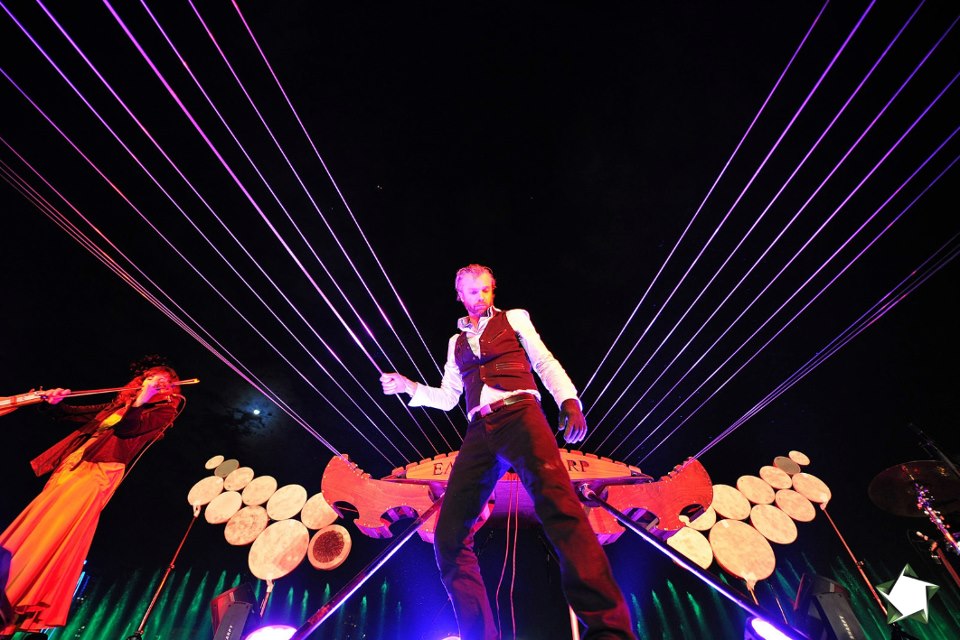 The Hills Come Alive with Antelope Audio and “The Earth Harp”

By Michael DiMattio in Antelope Audio
No comments

Ever since his art school days in the late 1990’s while attending the prestigious Chicago Art Institute, William Close pursued his dream of building and performing with unique, handmade instruments whose sounds have never been heard anywhere in the world. Now, The Earth Harp, his masterpiece instrument creation of unprecedented physical scale and sonic beauty, has been captured in astonishing fidelity in a brand new recording — thanks to the digital clocking and conversion technology of Antelope Audio.

For many years, Close flew largely under the radar of the public eye, teaching and perfecting his craft while experimenting with unique materials and applications.  All that changed last fall, when he was featured on America’s Got Talent, the U.S.-based reality show that attracts millions and millions of viewers from around the world. For his performance, which left the audience and judges both stunned and enchanted, Close strung The Earth Harp from the stage to the railing in the first balcony — effectively transforming the entire orchestra section of the theater into a giant resonating chamber and part of The Earth Harp itself.

The Earth Harp consists of a resonating chamber from which up to 18 strings can extend any distance. The strings, which are custom manufactured to Close’s specifications using a type of brass, is played as the musician pushes his or her thumb and forefinger along the string, creating a compression wave. Close says this is similar to the effect of running a finger along the edge of a crystal glass: “You are actually pushing the vibration and molecules of the material to create soundwaves,” he explains.

His new album with The Earth Harp Collective, Behind the Veil, captures the authentic sound of this spectacular instrument —from its lavish root notes to its rich harmonics and heavenly overtones. Close attributes the success of the recording in large part to Antelope Audio’s new Rubicon A to D converter, which was used as the primary mastering device, and its Orion32 multi-channel interface, which was used during playback. “I’ve never heard The Earth Harp sounding so good on a recording,” he says. “The instrument has so many beautiful harmonics and overtones, and many times these are lost in the process. The Antelope equipment was awesome and helped us finally achieve a true representation of how The Earth Harp actually sounds.”

“I had just gotten the Antelope Rubicon, so I thought I would try its A to D capability on this project,” recalls Marcel James, mastering engineer and Director of Sales and Marketing for Antelope Audio (USA). “The sound of The Earth Harp suddenly had this larger than life sound that really lent itself well to the material.” Interestingly, James was not familiar with The Earth Harp when he first heard the final mixes. When he stumbled on a video of Close’s performance on America’s Got Talent, he got chills: “When I saw his video on America’s Got Talent, suddenly it all made sense,” he recalls. “From that point on, the project took on a new meaning. Here was a relatively new artist, a new instrument and a special new piece of equipment from Antelope that had an A to D converter and a built-in atomic clock.”

In the mastering phase, James printed audio files for the CD at 44.1, but also made 96 kHz, 24-bit masters, which he wants to help Close make commercially available. Given the unique audiophile nature of the recording, he also ran a pass of 96/24 audio with no limiting and had vinyl records cut on a mastering lathe.

The entire album was recorded at Close’s home in Malibu, where he has the massive harp set up in a glass enclosure within his home studio. The strings of the instrument extend through the glass and attach to the side of a mountain directly beside his home.

The Pursuit of Passion and “The Ultimate Edit”
During his career, Close has invented over 100 instruments. He is also an accomplished teacher and has lectured at universities and educational facilities all over the world. In addition to his recent successes with America’s Got Talent and Behind the Veil, Close has performed to audiences in all corners of the globe, stringing up his instruments to famous architectural landmarks such as the Space Needle in Seattle and aside the ornate temples of India.

But Close’s success has come at a price and there have been bumps in the road, he says. “In 2007, I woke up one morning, opened the door and the entire hillside was on fire. The fire burned my whole house down, and all the instruments I ever built. I called this the ‘ultimate edit.’ Life edited away all these things, so I had to rebuild.” Within four years, Close had rebuilt his home and all his instruments. “The instruments are more evolved now,” he observes.

For more information about The Earth Harp Collective’s Behind the Veil, please visit: http://williamcloseholidays.bandcamp.com/album/behind-the-veil.