Developed by Supro with assistance from the David Bowie Archive, the David Bowie Limited Edition Dual Tone is based on the main guitar David Bowie played on the Reality album and throughout his final world tour, “A Reality Tour”, in 2003-2004. Although he played a variety of guitars throughout his career, Bowie enjoyed a special relationship with the iconic vintage 60’s Supro Dual Tone he had customized to his specifications. Bowie’s guitarist Earl Slick says, “Of all the electric guitars that David played and owned over the many years that we worked together, he loved the Supro best. He was quite proud of it actually. I’ve never seen him get attached to a guitar, except that one.” 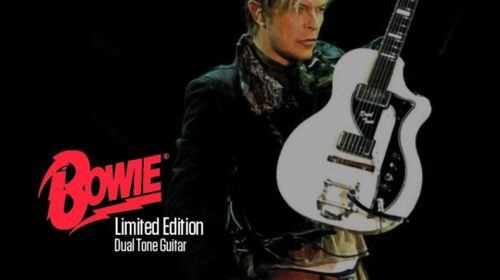 During the recording of the Reality album in New York City in early 2003, Bowie purchased two early-60’s Supro Dual Tone guitars on EBay. One of them, which is prominently featured on the cover art of the New Killer Star single, was a 1961 hardtail model. A second Dual Tone was modified by master luthier Flip Scipio, who inlaid the top five fret slots with rainbow colors after installing a Bigsby vibrato at Bowie’s request. “They brought me the second guitar and needed it done very fast, within one day,” recalls Scipio. “That is why I did not reinstall the top frets. The fret filler is made of dyed Japanese maple. David loved the way this guitar looked and sounded, so I chose the colors based on what I thought would look cheerful. I felt that if I can be happy with the guitar, then David would be happy with the guitar as well.” It was this highly customized Supro Dual Tone that became Bowie’s favorite guitar and main live instrument, appeared on the cover of the “A Reality Tour” live album, and inspired this limited edition 2018 re-creation.

Why did Bowie choose the Dual Tone? Guitarist Gerry Leonard, who played on both the Reality album and tour, says: “David was a discerning collector of not only art, but all things to do with music, music artifacts and specific instruments. The Supro was a guitar that nailed a few of these criteria for him. It’s a very stylish guitar and it has a great vibe and sound. It was a fantastic guitar and David loved it so much, it was the only one he wanted to play, even though we had many other great instruments from famous makers available to him.”

Although we know that the guitar’s Art Deco style appealed to Bowie’s well-known flair for design, we also know that he had a fascination with the instrument’s early legacy. He advised James Murphy of LCD Soundsystem to get a Supro Dual Tone specifically because it was the guitar played by power-chord pioneer Link Wray. The Dual Tone famously appears in the promotional artwork for Wray’s 1958 hit song “Rumble”: a recording noteworthy for being the only instrumental song ever to be banned from US radio. Bowie even chose to pay homage to Link Wray, using “Rumble” as a musical interlude during the Reality Tour. Clearly, the rock and roll mythology of Link Wray and his affinity for Supro guitars made a lasting impact on David Bowie.

The Dual Tone model first appeared in Supro catalogs in the early 1950s. The distinctive tone of the Supro Vistatone pickups has been a consistent highlight of this instrument throughout its evolution. Supro’s 1953 catalog boasted: “We sincerely believe the pickup system to be the finest we have ever produced in over two decades of electronic development. Make an honest comparison with any instrument for tone, volume, and performance–you’ll be truly surprised.” Over the subsequent five years after ’53, the neck was improved, headstock changed, body widened, pickup wiring changed, and contoured bevels added to the body. By 1958, the Dual Tone was totally dialed in, and became a bestseller for Supro. 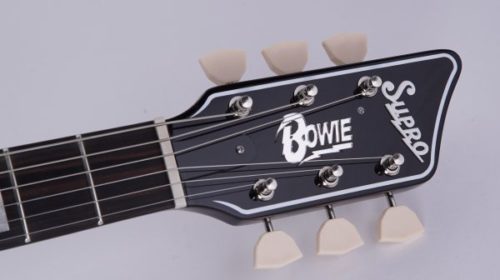 In keeping with the spirit of innovation that evolved the 1953 Dual Tone into the 1958 model favored by Link Wray, the construction of the Bowie guitar has been further developed with subtle tweaks and refinements to carry the torch into the present day—while retaining the vibe of the original instrument. This incarnation of the Dual Tone guitar features a 24 ¾” scale maple neck with a rosewood fretboard and set-neck construction. The alder body has a tummy cut for increased playing comfort, as well as an ergonomic neck joint, allowing full access to the high frets. Hardware appointments include Bigsby vibrato, roller bridge, butterfly tulip tuning pegs and a matched set of vintage-correct Vistatone pickups, designed to replicate the genuine Supro sound that David Bowie loved.

As a final touch, the David Bowie Limited Edition Dual Tone features a mirror-finish Bowie lightning bolt insignia on the face of the headstock. In further tribute to Bowie’s personal favorite Supro guitar, the top five frets have a multi-colored rainbow pattern inlaid into the fretboard to replicate the look of the custom work done by master luthier Flip Scipio for the Reality album and subsequent world tour.

Only 300 pieces of the Supro David Bowie Limited Edition Dual Tone guitar will be made. The instrument will retail for $1,199 USD. Contact your Supro dealer to reserve one today.