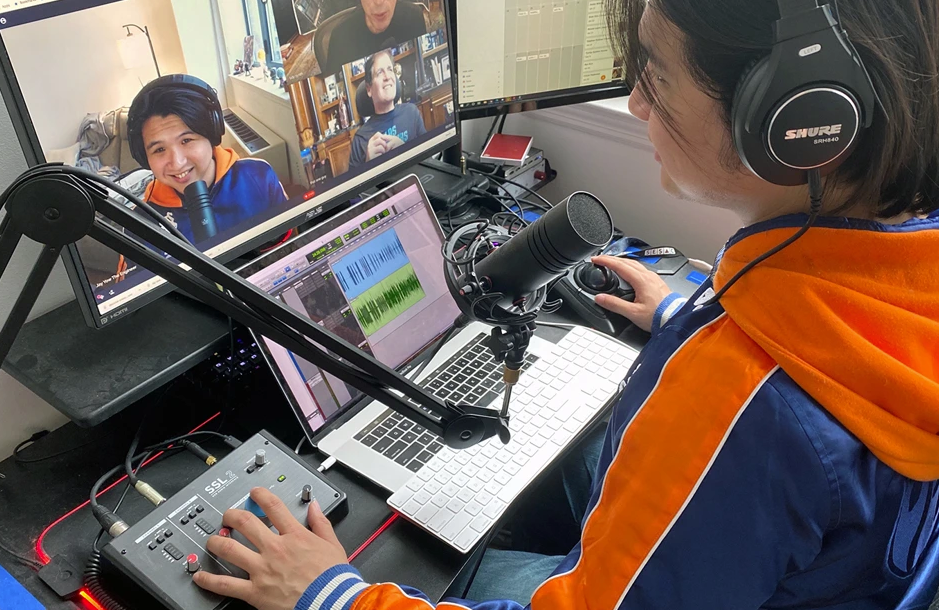 For six years, engineer Jay Yow has recorded entrepreneur, investor, and writer James Altucher’s interview-based podcast, watching it blossom from a living-room experiment to a podcasting powerhouse boasting no less than 40 million downloads. “The James Altucher Show is about peak performance, so James has had guests like Tyra Banks, Mark Cuban, Peter Thiel, Tony Robbins, Tim Ferriss, William Shatner, and others who excel in their respective fields,” Yow says. Now the power of the Solid State Logic’s SSL 2 interface allows Yow and Altucher to create a professional grade podcast from the comfort of Altucher’s apartment — even when Yow can’t be there in person.

The New York-based Altucher was a natural fit for the podcast interview format, with his genuine inquisitiveness and amiable candor. But Yow saw his podcast move to the next level as he started getting more serious about sound. “When James first started out he would do interviews on Skype on his phone in his living room or bathroom,” Yow says. “In 2014, when he started going into a recording studio, his downloads quadrupled. So sound quality is very, very important in podcasting.” The James Altucher Show has since ascended to become one of the top 50-ranked podcasts on the popular Stitcher podcast service.

Yow and Altucher first met working together at New York’s now-defunct Sweet Sound Studios and went on to record in a variety of different studios in the area before transitioning to recording exclusively in Altucher’s home in 2019. Yow had been transporting his personal recording rig to Altucher’s house for sessions, but the COVID-19 pandemic presented a new challenge. “During the pandemic it really hasn’t been possible for me to go to James’s house, so I had to find a solution for him to record the podcast without me there,” he says. “James has no engineering experience whatsoever, so I was looking for a small interface for him that sounded great but that was also simple enough that I could very easily direct him to make adjustments remotely.”

Yow tested several two-channel recording interfaces, but most lacked the simplicity and studio-quality sound he sought. Enter the SSL 2. “I’ve been using SSL equipment for years in recording studios, so I was familiar with the quality of their preamps, compressors, and consoles,” he says. Yow test-drove the SSL 2 himself and was immediately impressed with the simplicity and directness of the hardware itself and its dedicated knobs. “Whatever button and knob you see on the SSL 2 is whatever the function is,” he says. “You don’t have to dive into settings or menus, you don’t have to click anything multiple times. Everything is self-explanatory, which was unlike any other small interface I had tested.”

Utilizing a Shure SM7B, the SSL 2’s preamps and Legacy 4k feature give Yow exactly what he needs for Altucher’s voice. “For an interview-based podcast in a non-sound-treated space, I definitely prefer dynamic mics over condensers,” he says. “The SSL 2 has great preamps, and the 4k mode is amazing. I always have that engaged, especially with the SM7B. The Legacy 4k mode really opens up the high end without bringing up the noise.”

Part of Yow’s research into remote podcast recording setups included finding the right conferencing tool to allow the most flexible recording of Altucher and his guests. “I use Squadcast a lot,” he says. “It’s like Zoom, but it records multiple tracks of audio and does progressive uploading, so as the recording goes on it uploads the files to the server progressively.” Nevertheless, the entire session hinges on reliable performance from his audio interface. “That’s another reason why having the SSL 2 is great: in addition to the amazing sound, the platform is very stable. This was the first audio interface from SSL that I was aware of, so I was really impressed at how rock solid it is.”

Training Altucher on the unit was easy. “Once we had our basic settings dialed in, I could point to the gain knob and say, ‘this is the only knob you need to know that I will tell you to move up and down during recording’. But if we need to adjust anything else, it’s all clearly labeled and color coded so it’s very easy for me to describe what’s needed.” The duo track up to five podcast episodes in a week, and Altucher and Yow are up and running in just seconds each time.

For interview recording, creating the right energy that allows the most natural flow of conversation is important to Yow. “In a studio environment where both participants are together, I would never have them wearing headphones,” he says. “People tend to be more self-conscious when they’re hearing their own voice through headphones. During the pandemic, obviously we need to use headphones, but I still insist that my clients don’t hear any of their own voice in the mix, just the other person.”

Even though Altucher does not have his mic signal in his headphone mix, the SSL 2’s Monitor Mix knob allows Yow to quickly check the signal for any cable issues or interference. “Even remotely I can easily see from the meters that I’m getting signal, but I will have him adjust the Monitor Mix knob quickly to check that the mic signal is of a good quality, with no crackling or anything. It’s a lot easier than having to go into Pro Tools and record-enable a track. We can just turn it up, go “yeah this sounds great!” and turn it back down to do the interview”

In addition to podcasting, Yow appreciates how well the SSL 2 would work for other applications, like video-game streaming and music recording. “The SSL 2 is great for streaming,” he says. “I’m a gamer myself, and I like to stream from time to time. Between the SSL 2 and OBS (Online Broadcaster Software) you don’t need a separate mixer at all. With a mixer you have too many knobs and people get intimidated by it, but with the SSL 2 you’ve just got the red knob, and the blue knob if you need it, and the headphones.”

Music recording is also a snap with the SSL 2. “It’s really well-designed for music applications, with the Hi-Z inputs, great preamps, and the big monitor knob,” he says. “I also like the stereo monitoring capabilities of the unit as well. A majority of small interfaces have direct monitoring in mono only, but the SSL 2 allows you to engage hard panning of channels 1 and 2. So it’s really good for keyboardists who are working on a soundtrack, or who just want to plug in and play with a keyboard. They can hear their instrument in proper stereo without having to go into Pro Tools and all that.”

For Yow, podcasting is an incredible growth space for the industry and the SSL brand, and the SSL 2 is his recommendation for anyone getting serious about their sound. “I actually got busier work-wise when quarantine started because of podcasting,” he says. “Since mobility was limited, there’s a lot more remote recording than in-person recording now. So I’ve been giving lots of clients recommendations on equipment, and I always suggest the SSL 2.”

Even for those not sure whether they want to enter the podcasting fray, it is better to be prepared. “Podcasting is so big now that I feel like everyone should have a microphone, headphones, and an interface at home because you never know when you’ll be invited on a podcast,” he says. “It’s even easier than making music at home. But since most podcasters aren’t engineers, simplicity is the most important thing, and the SSL 2 is just so easy to use. You don’t have to click into multiple layers, you never have to toggle between pages or go to computer settings or a mixer page, it’s compatible with both Mac and Windows, and the preamps sounds way better than the other popular 2-channel interfaces out there.”

While the James Altucher Show continues to inspire listeners with its top-tier guest list and refreshing insights, Yow is excited about the future of podcasting and the new products like the SSL 2 that make it easier than ever to create professional-grade media. “When you start out with a podcast, of course you focus on great content and use whatever gear you have,” he says. “But when your podcast starts to grow, it’s time to look into better quality gear like the SSL 2. With the level of quality the SSL 2 offers, and at such a competitive price point, it’s an easy decision.”