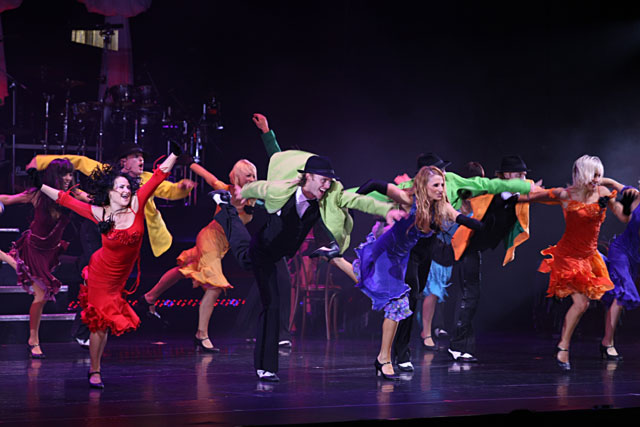 These mini concerts are a great way to break the week with something different and get a free taste of a hit show. I’ve been to both of the past mini concerts – Hair, Rock of Ages – and South Coast Plaza is a great venue.

COSTA MESA, CA – Due to the popularity of past events, Segerstrom Center for the Arts and South Coast Plaza will host three additional mini-concerts performed by cast members from upcoming award winning Broadway shows during their engagements at the Center:

BURN THE FLOOR on June 1, MARY POPPINS on July 13 and WEST SIDE STORY on September 7. The public is invited to attend the freemini-concerts, which all start at 1 p.m. on the ground floor level of Carousel Court at South Coast Plaza. For each performance, cast members will perform a selection of musical numbers from their show. Afterwards, the cast will be available to sign autographs and meet audience members. There will also be ticket giveaways for each Broadway engagement at Segerstrom Center.

BURN THE FLOOR, featuring Anya and Pasha, visits Segerstrom Center May 31 – June 12. Years before Dancing with the Stars and So You Think You Can Dance turned ballroom dancing into must-see TV, BURN THE FLOOR was blazing a new dance trail and igniting stages around the globe. In BURN THE FLOOR, Ballroom Dance is totally reinvented. All the dance styles are refreshed and reinvigoratedand leave audiences grinning with delight and screaming for more.

MARY POPPINS flies into Orange County July 14 – August 7. With four productions currently running on three continents, MARY POPPINS is one of the biggest stage musical successes to emerge from London or New York in recent years. Worldwide to date, the show has grossed over $521 million and welcomed 7 million guests and cumulatively run 11.5 years. The musical is the winner of 35 major theatre awards around the globe, including Tony®, Olivier and Evening Standard awards.

The smash Broadway revival of WEST SIDE STORY makes its way to Segerstrom Center September 6 – 18. The newBroadway cast album of WEST SIDE STORY won the 2010 Grammy® Award for Best Musical Show Album. The Bernstein and Sondheim score is considered to be one of Broadway’s finest, featuring such classics of American musical theater as “Something’s Coming,” “Tonight,” “America,” “I Feel Pretty” and “Somewhere.”

Before or after any of the performances, audience members may enjoy lunch at one of South Coast Plaza’s outstanding restaurants. There are lunch specials for every palate and pocketbook, from eateries like the fast-casual noodle bar at AnQi, DG Burger, Lawry’s Carvery or Signature Kitchen at Macy’s Home Store to prix fixe fine dining at Marché Moderne, Charlie Palmer at Bloomingdale’s, Pizza Ortica, Morton’s the Steakhouse and Royal Khyber Fine Indian Cuisine. For more information, please visit southcoastplaza.com.

Tickets to see BURN THE FLOOR and MARY POPPINS are available now online at SCFTA.org, by calling (714) 556-2787 and at the Box Office at 600 Town Center Drive in Costa Mesa. For inquiries about group ticket discounts, call the Group Services office at (714) 755-0236. The TTY number is (714) 556- 2746. Single tickets to WEST SIDE STORY will go on sale July 17. Segerstrom Center applauds Wells Fargo for its generous support of the 2010-2011 Broadway Series. Cox Communications is the media partner of the Broadway Series.

Segerstrom Center for the Arts is unique as both an acclaimed arts institution and as a multidisciplinary cultural campus. It is committed to supporting artistic excellence on all of its stages, offering unsurpassed experiences, and engaging the entire community in new and exciting ways through the unique power of live performance and a diverse array of inspiring programs. Previously called the Orange County Performing Arts Center, Segerstrom Center traces its roots back to the late 1960s when a dedicated group of community leaders decided Orange County should have its own world-class performing arts venue.

The Center presents a broad range of programming each season for audiences of all ages from throughout Orange County and beyond, including international ballet and dance, national tours of top Broadway shows, intimate performances of jazz and cabaret, contemporary artists, classical music performed by renowned chamber orchestras and ensembles, family-friendly programming, freeperformances open to the public from outdoor movie screenings to dancing on the plaza and many other special events. It offers many education programs designed to inspire young people through the arts. These programs reach hundreds of thousands of students of all ages with vital arts-in-education programs, enhancing their studies and enriching their lives well into the future. In addition to the presenting and producing institution Segerstrom Center for the Arts, the 14-acre campus also embraces the facilities of two independent acclaimed organizations: Tony® Award-winning South Coast Repertory and a site designated as the future home of the Orange County Museum of Art.