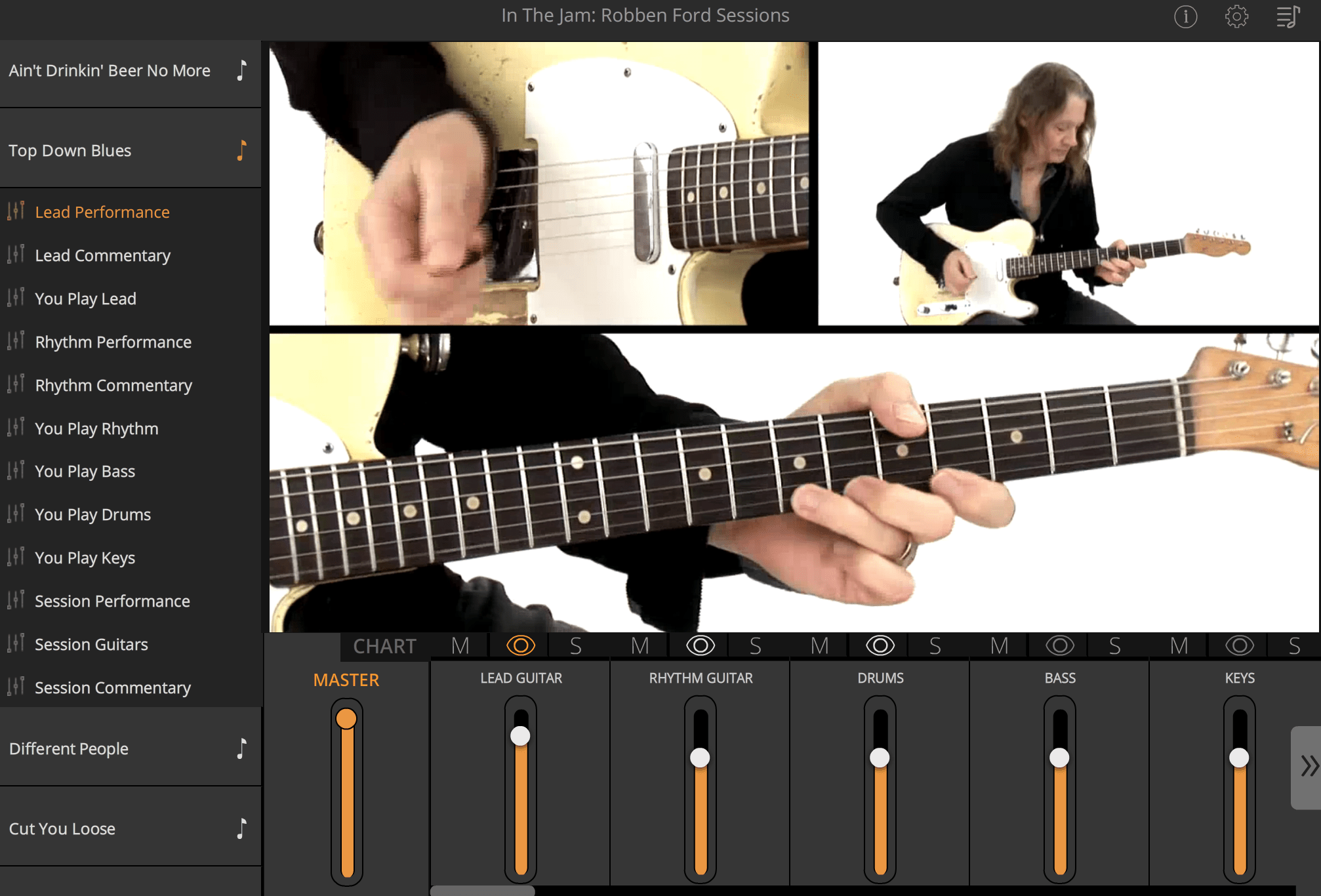 Keyboardists, drummers, bassists, and even guitarists can all now have a chance to jam with Robben Ford. The legendary guitarist invites musicians to join him and his band in the studio. From the comfort of their own home, players can join these “live” sessions. Musicians can mute whatever instrument track they prefer and jump on in.  They can even fill in for Robben! The multi-track video jams are pre-recorded, pre-loaded, and ready to go through TrueFire’s “In The Jam” downloadable software for Windows and Mac computers.

Travel back to Oct. 27, 2013, when Robben gathers several musicians in one of Nashville’s premier recording studios to lay down the tracks for his album, “A Day in Nashville.” Robben is joined by Audley Freed on rhythm guitar, Brian Allen on bass, Wes Little on drums, Barry Green on trombone and Ricky Peterson on B3 organ. Robben leads this all-star band through nine bluesy, soulful tunes before heading to Nashville’s famous House of Blues studio. There, he and co-producer Rick Wheeler lay down vocals and guitar tracks for each of the songs. True to its name, the album is completed in a day; however, the journey doesn’t end there. Robben heads down to TrueFire’s studios to record all-new rhythm and lead parts for the songs, all with close-up views of his performance.

In total, there are more than six hours of multi-angle video tracks to choose from, along with all the separate audio tracks to mix. “What’s really cool about the In The Jam software is that you can mute or solo any instrument. So if you’re interested in my rhythm part, or even the drum part, you can solo it up, listen to it and learn it. Or you can take it out and you can play rhythm along with my lead part, or mute the drum, keyboards or bass tracks and play those parts with the band.” says Robben. “No matter what instrument you play, there’s a place for you in the band even if you’re a vocalist.”

While at TrueFire studios, Robben recorded a commentary track for each of his new performances. He takes you through everything he plays, the inspirations behind his playing, and why he chooses certain chord voicings. The commentary is accompanied by guitar tabs and notations, along with lead sheets. Robben also filmed new lead and rhythm guitar parts for each tune doubling the educational value for guitarists.

The record covers a broad spectrum in terms of styles, including jazz, rock, blues and country—or as Robben puts it, “something for everybody.” It’s a testament to how this five-time GRAMMY® nominee has built his career as a premier electric guitarist in a variety of musical contexts. Named one of the “100 Greatest Guitarists of the 20th Century” by Guitar Player Magazine, Robben has played with artists as diverse as Joni Mitchell, Miles Davis, George Harrison, Bob Dylan, Greg Allman, Brad Paisley and more. Today, after 40 years on the road or in the studio, Robben graciously shares what he has learned with current and future musicians.

From start to finish and fully behind the scenes, TrueFire’s In The Jam platform is the perfect opportunity for musicians of various backgrounds to witness the creative process in a comprehensive, professional format. To download the Robben Ford session for $49, and to check out other In The Jam sessions, visit http://tfir.es/ITJRobbenFord.