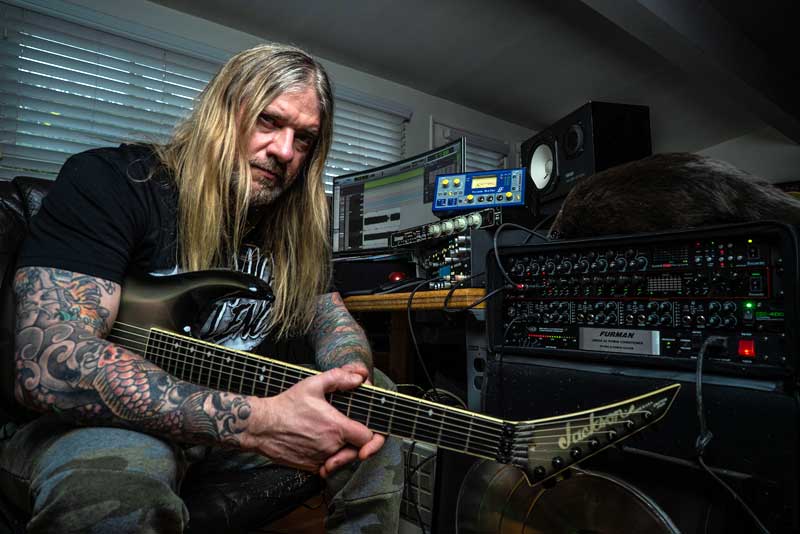 Bassist, vocalist, composer, and producer Christian Olde Wolbers has been an integral part of the California metal-music scene for over two decades, working with projects like groove/industrial-metal band Fear Factory and hardcore punk/crossover-thrashers Beowülf, and currently as a member of thrash-metal Bay Area band Vio-lence. But from his earliest days as a fledgling musician in his native Belgium and as he began to establish himself in the west coast’s metal world when he moved there in 1993 and joined Fear Factory, he remembers Focusrite audio technology being just about everywhere. “The ISA 430 was in every studio,” he recalls. “I remember seeing the blue front plate and the yellow dials, and I came to associate that look with great sound. I eventually got my own 430 MkII and loved it.”

Today, Wolbers works with the newest generation of Focusrite technology, building a complete ecosystem with the ISA One Mic Pre, the Scarlett 18i20 rackmountable interface with the OctoPre extending it to 16 inputs, and taking his ultraportable Scarlett 4i4 interface with him on the road. “I’m finding that the ISA One is just about all I need on some sessions,” he says. “It’s so versatile and I use it for everything — bass, guitars, vocals. At home I’ll record bass using the DI going straight in and getting exactly the sound I want. In the studio the other day the producer listened to the bass though it and said, ‘Let’s just go with that — it’s perfect!’”

The Scarlett 18i20 rackmounted mic preamps are now Wolbers’ home-studio linchpin, and with the added channels from the OctoPre, he has 16 channels all with A-D conversion up to sample rates of 192 kHz. “And connecting the 18i20 and the OctoPre was a matter of a single cable,” he says. “The OctoPre is one of those Focusrite units that are everywhere now. I was at Ocean Way Studios the other day, and it was there. Engineers take projects home on their laptops and they all have that little red box. I was just using two of them on the preproduction demos I’m doing for the next Vio-lence record with [producer] Juan Ortega and legendary mixer Terry Date. I’m using them to record drums, bass, guitar and vocals. And we’re also using the 18i20 pre-amps for that. In fact, it sounded so good that the band released a cover song they recorded — the Dead Kennedys’ ‘California Über Alles’ — using it. That’s how good it sounds and how easy it is to use.”

Wolbers travels a lot, and while he might not be doing as much touring as he used to during the pandemic, he’s also an avid carp fisherman, and the Scarlett 4i4 fits easily into his backpack. “We have these bedchairs we use when we’re fishing on the lake and I’ll pull out my laptop and work on music while I’m fishing,” he says. “The 4i4 is so compact I can take it anywhere, and it’s powered through USB so I don’t need power. I’ve used on planes, on buses, on tour. I just set it up on the table and go.”

Wolbers likes the Scarlett line’s functionality — the four monitor outs featuring anti-thump tech and speaker switching on the 18i20 and dual front-panel instrument inputs on the OctoPre, for instance — but mostly he loves that Focusrite sound. “The quality of the tone, it’s so ‘60s and ‘70s, which I love,” he says. “You get that automatic edge to your sound. They’ve been making great interfaces for decades now, and you can tell they take a lot of pride in what they do, as do I. Focusrite to me now is kind of like when you see BMW or Mercedes Benz, you just know that it’s just great equipment and reliable. And now I get one of those little magical, little red boxes, too.”