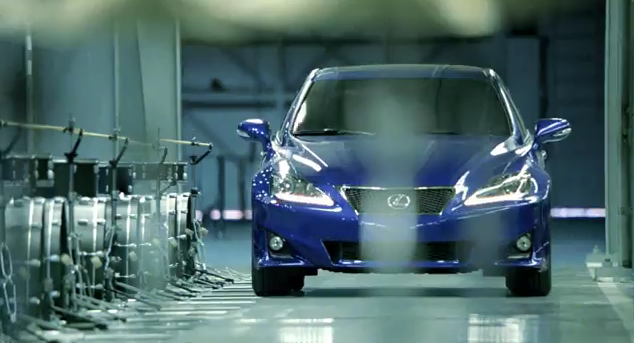 So you’ve already called your Lexus dealer to reserve your new 2011 IS 350, in hero blue, no doubt. Now your just spending the night getting up to speed on all the cool features, from the racing-inspired paddle shifters to the 306 horse-power, to the F-sport tuned suspension to the trigger-pad-powered kick drums, snares and hi-hats. What?

Sadly, a drum set is not included with the new Lexus, but you can live vicariously through the crew that had the maddening yet thrilling job of doing the math and working out all of the arduous bits required to make this commercial a success. It all equaled out to 155 beats per minute. Sounds simple enough, but it actually took an entire crew of people from drum tech Todd Burr to the Chair of Mathematics at LMU, Dr. Curtis D. Bennett, PHD to get it all worked out. It also took the precision driving of the non-musical Eddie Braun, who can now say he’s played an instrument – with a 2011 Lexus IS.

Moral of the story: “The Placement of the Drums is a Mathematical Thing.”