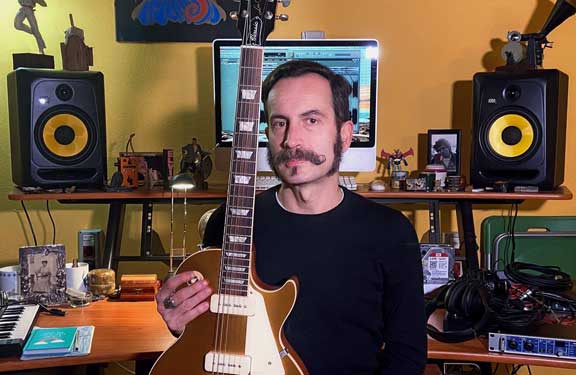 KRK HITS ALL THE MARKS FOR ITALIAN GUITARIST XABIER IRIONDO

Milan-based musician Xabier Iriondo has been dedicated to his craft since he picked up his first guitar at age seventeen. Today, he is a guitarist and sound engineer working with dozens of bands on over 50 records. From being the principal guitarist for Italian rock band Afterhours to recording a new album with electronic musician Alula, and working with groups like experimental post-core band Buñuel, Iriondo is always busy performing and creating. While Afterhours recordings are completed in a professional studio, most of Iriondo’s personal work is done right in his home studio. For these projects, Iriondo turns to his KRK CLASSIC 8 studio monitors and KNS 8402 headphones.

“I’ve been recording and mixing with KRK for my solo album and on Buñuel’s new album, ‘Killers Like Us,’ that’s coming out this February, and I’ve been so pleased with the results. The CLASSIC 8 monitors have a lot of power, which is great for adding low and high frequencies depending on what kinds of music I’m working on. The KNS 8402s are so lightweight and comfortable that they are now my favorite headphones. The first time I heard KRK, I was so impressed by the quality of sound that I decided to go with them for my next setup. I’ve been using the brand for about five months now, and as soon as I switched, the rest was history.”