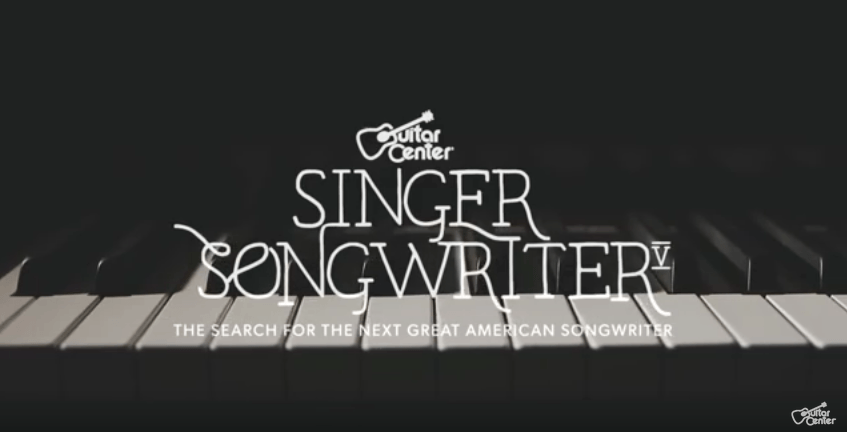 Guitar Center’s Singer-Songwriter launches its fifth installment today, offering aspiring singer-songwriters across the country the chance to take their careers to the next level. The winner of Guitar Center’s Singer-Songwriter 5 will have the opportunity to record a 4-song E.P with Grammy award-winning producer Ariel Rechtshaid (Usher, Diplo, Vampire Weekend, HAIM and more), perform to a national television audience on Jimmy Kimmel Live! which airs weeknights at 11:35|10:35c on ABC, take home new gear, $25,000 cash and much more. Joining the fold of advisers this year is Dallas Green of City and Colour who will lend his talents as a mentor to the winner, guiding them through the writing and recording process.

Beginning September 1, 2015 through November 2, 2015 unsigned singer-songwriters from across the continental United States are invited to submit an original live music performance video at www.guitarcenter.com/songwriter. Submissions will be ranked on their social media engagement and fan growth throughout the submission period. The top-ranked 150 artists will be reviewed personally by Ariel Rechtshaid who will then handpick 5 finalists to perform live in Los Angeles, CA where one winner will be named. For official rules please visit: songwriter.amplifiertv.com/rules

“Guitar Center was always a great resource to me and my friends growing up, making records and playing in bands. I’m proud to be helping Guitar Center give a talented singer-songwriter the resources, a TV performance and some time to play around in the studio with me and my crew.”
– Ariel Rechtshaid

“There is no right or wrong in music. It’s just a personal choice to feel something or not. I’ve been very fortunate in my life as a songwriter and a lot of it has to do with luck. There are so many talented people out there who we will never notice because they’re just not as lucky. This program is a wonderful way to shed some light on those diamonds who just can’t seem to find their way out of the rough. I’m honored and humbled to be included this year.”
– Dallas Green (City and Colour)

“We’ve seen this program grow tremendously over the past four years in terms of the sheer number of submissions received and overall awareness within the music industry. It is such an honor to have two such incredibly talented artists like Ariel and Dallas both lending their skills for Singer-Songwriter 5 and we are looking forward to reaching even more musicians than ever before.”
– Jake Cheung, manager of music marketing and artist relations at Guitar Center

About Ariel Rechtshaid:
Ariel Rechtshaid is a Grammy Award-winning producer, engineer, multi-instrumentalist and songwriter. He is known and praised for his work with a diverse list of artists, including Haim, Sky Ferreira, Vampire Weekend, Charli XCX, Brandon Flowers, Madonna, Tobias Jesso Jr., Usher, Carly Rae Jepson, Cass McCombs and Justin Bieber among many others. In 2014, Rechtshaid was nominated for a “Producer of the Year” Grammy and won for his production on Vampire Weekend’s Modern Vampires of the City, which was awarded “Best Alternative Music Album.” Of Rechtshaid, The New Yorker asserts, “His sounds have an odd brightness, so that even intensely personal songs end up feeling buoyant, and—here is where the labels start writing checks—he is exceptionally good at getting the best out of singers. His approach differs from that of producers who make their name with a sound that watermarks each song and can risk overshadowing the vocalist,” while Stereogum proclaims, “If anyone working right now can change the way pop music sounds, it’s Ariel Rechtshaid.” Moreover, Pitchfork calls him, “…a go-to pop producer of the highest caliber.”

About City and Colour:
City and Colour (aka world-renowned singer, songwriter and performer Dallas Green) will release his fifth studio album, If I Should Go Before You, on October 9. The new record follows 2013’s The Hurry and The Harm, which received widespread critical and commercial praise. The album debuted at #1 on Canada’s Top 200 Chart, #16 in the U.S., #4 in Australia, #32 in the U.K., and #83 in Germany—all career highs. Of City and Colour, Esquire praises, “His music, often dreamy and introspective without being moody and bleak, and maintaining a unique edge, is the perfect score for a long drive or quiet afternoon,” while the BBC asserts, “…tells a story with a sincerity and fluency that is truly masterful.” Most recently, in 2014, Green collaborated with international superstar Alecia Moore (aka P!nk) on a new project, entitled You+Me.

About Guitar Center:
Guitar Center is the world’s largest retailer of guitars, amplifiers, drums, keyboards, recording, live sound, DJ, and lighting equipment. With more than 260 stores across the U.S. and one of the top direct sales websites in the industry, Guitar Center has helped people make music for more than 50 years. In addition, Guitar Center’s sister brands includes Music & Arts, which operates more than 120 stores specializing in band & orchestral instruments for sale and rental, serving teachers, band directors, college professors and students, and Musician’s Friend, a leading direct marketer of musical instruments in the United States. With an unrivaled in-store experience, an industry-leading online presence and passionate commitment to making gear easy-to-buy, Guitar Center is all about enabling musicians and non-musicians alike to experience the almost indescribable joy that comes from playing an instrument. For more information about Guitar Center, please visit www.guitarcenter.com.