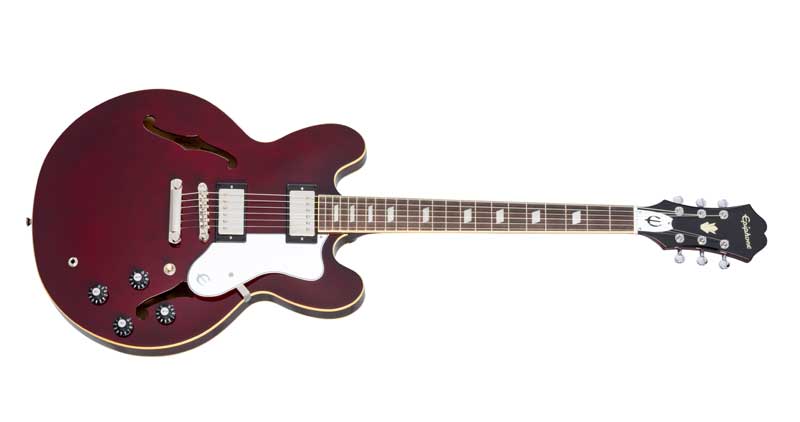 Gibson and Epiphone have teamed with world renowned singer, songwriter and guitarist, Noel Gallagher to re-create his beloved 1960 Gibson ES-355 and his Epiphone Riviera used during the mid-nineties

“Fuck me, what a Guitar!” says Noel Gallagher of the 1960 Gibson ES-355. “I’ve actually sent my main one back to storage, something I haven’t done since the day I bought it… THAT’S how good it is!”

“This is THE guitar associated with Noel Gallagher since the late 1990’s, we have taken our time over the details, we have worked closely with the artist and we have produced not only a truly remarkable recreation of the original but also a beautiful instrument which can be appreciated by all” says Lee Bartram, EU Head of Marketing & Cultural Influence EMEA at Gibson Brands.“Gibson Custom continue to push the boundaries of what can be done with new guitar production, this project is has been a labor of love for over 10 years and I’m extremely proud of what has been produced by amazing artisans in Nashville.”

Since the late 1990’s the 1960 Gibson ES-355 has been Noel’s main live guitar and continues to grace stages around the world and be seen by millions of people. Gibson is proud to launch a limited run of 200 pieces of Noel’s main electric guitar which includes all the appointments which make the Gibson ES-355 the pinnacle of guitar craftmanship, including a multi-ply bound maple body, a mahogany neck and ebony fretboard, a Varitone switch, and a Bigsby® B7 vibrato tailpiece. A reproduced handwritten lyric sheet, a hand-signed Certificate of Authenticity, and a custom Bear Strap exactly like Noel’s are also included.

“That guitar played a part on so many songs in the nineties it’s ridiculous” Noel Gallagher says of the Epiphone Riviera. “The Epiphone is excellent, really very good… sounds exactly like my original one, it’s a belter!”

“Very few artists encapsulate ‘For Every Stage’ like Noel Gallagher,” adds Lee Bartram. “From being discovered in Glasgow to performing in front of 250,000 attendees at Knebworth, Noel’s constant guitars were his Epiphones. The Epiphone Riviera is one of the most memorable and has been the inspiration for many guitarists coming out of that era. Noel Gallagher created a huge sound from that guitar while also using it to write and record some of the world’s most iconic anthems.”

Watch and share the new Noel Gallagher interview below on Gibson TVHERE, and Epiphone HERE. In the interview, Noel goes back to the Arden Villa in Pasadena, CA where Oasis shot the original video for the song “Don’t Look Back In Anger” (1996). Noel talks about the creation of the song and tells behind-the-scenes stories about the making of the video, view the clipHERE.

This is where it all started. During the early Oasis tours, Noel Gallagherplayed various Gibson and Epiphone guitars, but the early 80s Epiphone Rivieras stood out. The look and sound of these instruments gave the ultimate live experience to those seeing the ultimate live rock ‘n’ roll band. Epiphone is honored to welcome back Noel Gallagher to the core lineup with the Epiphone Noel Gallagher Riviera in a stunning Dark Wine Red finish. With the original still in the artist’s collection, Epiphone was granted access and, as a result, has included many historical elements on this new model. The inclusion of a volute completes a SlimTaper™ neck. The color and finish are a close match to that era, while the Epiphone Alnico Classic PRO™ pickups ensure the sound matches the looks. Extra touches such as historically accurate ‘E’ decals and a brown sound hole label give this guitar a vintage feel. Complete with an Epiphone hardshell case, the guitar is finished off with a silkscreened artist signature on the back of the headstock.

For over 25 years, Noel Gallagher has been at the forefront of British music and has established himself as one of the world’s most prolific songwriters and performers. As main songwriter, lead guitarist, and occasional lead vocalist of British band Oasis, and fronting Noel Gallagher’s High Flying Birds, Gallagher has played a tremendous role in shaping British Rock music from the 90’s onwards.

Noel Gallagher’s High Flying Birds first emerged in 2011 with their eponymous album released in October of that year. The album went double platinum in the UK and has sold over 2.5 million copies worldwide. By the time a second album was due for release, Noel Gallagher’s High Flying Birds had already played 150 live shows in 32 different countries.  The second album Chasing Yesterday was released in March 2015 – the first album to be produced, as well as written by Noel, who followed it up with another 122 shows in 28 countries.

Live appearances continued throughout 2019 with a host of headline festival dates and tours of the USA and Australia with Smashing Pumpkins and U2 respectively. Release wise, Noel has once again challenged industry norms by releasing a series of multi-genre EP’s over the course of 2019 and 2020. In March 2020, he released the 5-song EP Blue Moon Rising featuring the single “Wandering Star” and two title track remixes. In December 2020, Noel released the demo “We’re Gonna Get There In The End.” Noel is currently in the studio working on new music.