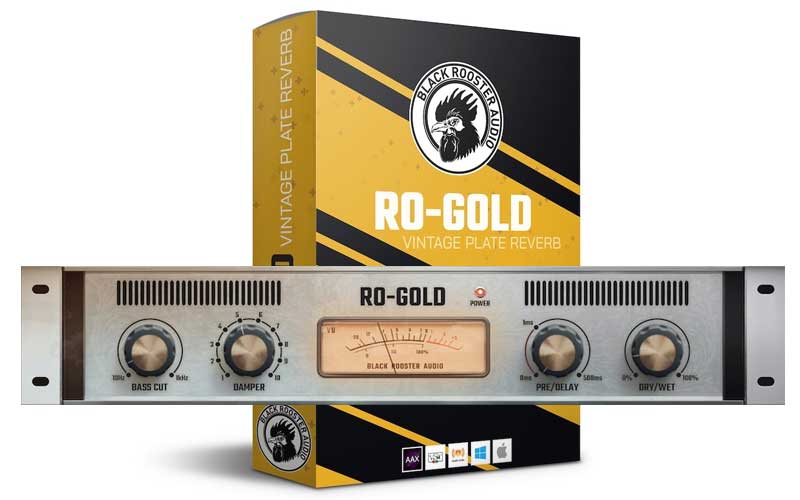 Black Rooster Audio “BRA” is proud to release its aptly-named RO-GOLD vintage plate reverb plug-in — authentically modeled after a hardware classic upgraded with a 24k gold plate for the most luxurious vintage reverberation experience, extensively compatible with all major DAWs (Digital Audio Workstations) — available for free as of August 30…

As an effect, reverb remains the quintessential element of modern-day music and sound design production, adding instant depth and atmosphere to any mix. It is perfectly possible to mimic (almost) any space in today’s age of on-tap reverb — all the more so in an ever-widening world of contemporarily convenient effect plug-ins, yet recording with the desired type and amount of reverberation has not always been so straightforward. Step back in time, then, to a different world, when a plate reverb’s original purpose was to emulate reverberant rooms — somewhat crudely, some might say. Saying that, though, when heard through today’s ears, some such solutions have historically become somewhat legendary themselves. The difference between a classic piece of hardware such as the late-Fifties-vintage (mono) EMT 140 Reverberation Unit — a somewhat bulky beast measuring around eight feet by four feet and weighing in at just over quarter of a ton as the world’s first plate reverb (using an electromechanical transducer, similar to that typically found in a loudspeaker, to create vibrations through the plate made from thin steel suspended between tubular steel frames, while pickups, like those found on an electric guitar, would capture those vibrations as they moved across the plate and output them to the console) — or its early-Sixties-vintage stereo successor and most modern, purely impulse response-based plug-ins is immediately apparent to any discerning ear!

Put it this way: while engineers have experimented with foil and metal plates to reproduce expensive reverb rooms since the Fifties, installing and controlling a real metal plate reverb has never been easily attainable, nor has it been readily available to every producer or small studio — all the more so when it comes to real gold plates. It is hardly surprising, therefore, that this type of hardware remained exclusive to a select few elite studios — such as California’s classic Capitol Studios and Gold Star Studios, as well as London’s legendary EMI Recording Studios (subsequently renamed Abbey Road Studios) — for a long time. That said, plate reverberation remains audible in many hit songs recorded throughout the Fifties and Sixties, where engineers extensively used this technique.

Fast-forward through to today, though, and not only does RO-GOLD authentically take the sound of those sought-after hardware classics to all major DAWs, but it also captures the true tone of a solid gold plate, which would cost a sizeable seven-figure sum to recreate in the contemporary real world. While this 24k gem allows anyone to set up their own retro room sound that is both warm and mellow, it has never been easier to achieve an authentic vintage reverb sound, thanks to the following few, simple-to-use parameters: complete control over the reverb decay time comes courtesy of a physically modelled version of a classic damper control, so users can choose between 10 DAMPER positions; purposefully placed after the plate reverb emulation to enable users to modulate the reverb tail with DAW automation, the classic PRE/DELAY (0ms to 500ms) control determines the amount of delay between the dry and wet signals; following the classic approach of send effects that run in parallel with the mix channel, the DRY/WET (0% to 100%) control keeps the effect in-chain within the plug-in, without having to set up additional send/return loops; and the BASS CUT control applies a high-pass filter that cuts the bass at any desired frequency between 10Hz and 1kHz. All are assisted by a lovely-looking VU meter that provides visual feedback for the reverb settings and signals.

But best of all, RO-GOLD is free for everyone, so it is really worth its weight in gold! Achieving an authentic vintage reverberation is simply a case of signing up for — or into — a Black Rooster Audio account (here: https://blackroosteraudio.com/en/landing/ro-gold) and activating the plug-in via e-mail. Entering Abbey Road Studios in the UK or Capitol Studios in the USA is entirely optional, but the most luxurious and exclusive vintage room effect meeting modern-day features for the highest-quality sound and optimal usability with RO-GOLD is a given! (Gold Star Studios, sadly, is no longer with us, having closed its doors back in 1984, a fire destroying the building several months after the studios themselves were vacated.)

RO-GOLD is available for free as a 64-bit AAX-, AU-, and VST-compatible plug-in for macOS (10.9 or later) and AAX- and VST-compatible plug-in for Windows (7 or later) by signing up for — or into — a Black Rooster Audio account (and activating it via e-mail) from here: https://blackroosteraudio.com/en/landing/ro-gold (More in-depth info — including some superb-sounding audio and video demos — is also available there.)

Anyone interested in exploring other plate materials and sizes is invited to check out Black Rooster Audio’s best-selling RO-140 vintage plate reverb plug-in, available to purchase — as a 64-bit AAX-, AU-, and VST-compatible plug-in for macOS (10.9 or later) and AAX- and VST-compatible plug-in for Windows (7 or later) — for $29.00 USD via its dedicated webpage, which also includes in-depth information (including some superb-sounding audio demos), here: https://blackroosteraudio.com/en/products/ro-140