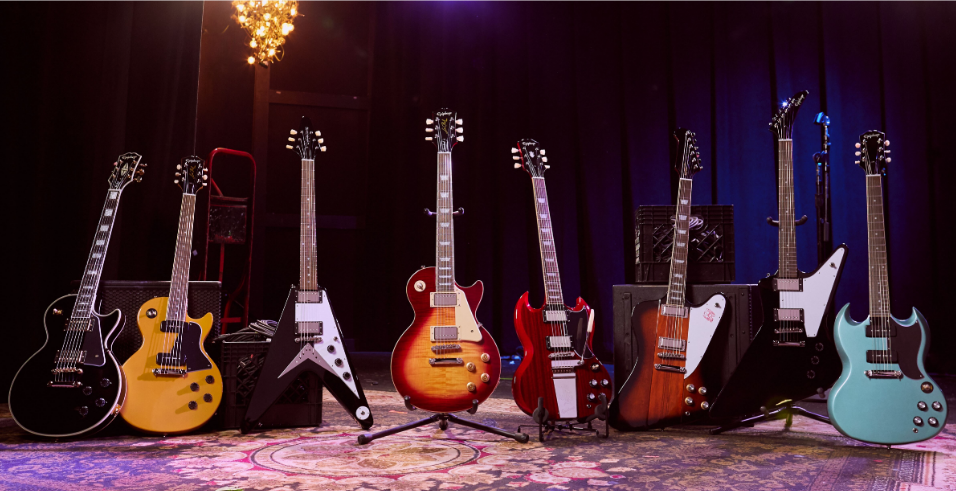 Epiphone Evolves In 2020 With New Guitars and New Brand Look

Epiphone “For Every Stage,” new guitar collections and new energy.

The new guitar portfolio has been reorganized into Epiphone Originals and Epiphone Inspired by Gibson.

The Epiphone Original Collection features new and classic acoustic and electric instruments that Epiphone fans worldwide depend on for every stage of their lives.For the first time in decades Epiphone is launching Epiphone Made in USA starting with The Texan, made in the Gibson Acoustic factory in Bozeman, Montana.Since 1958, the Epiphone Texan has been the inspiration for generations of world-class songwriters including Paul McCartney and Peter Frampton. Now, The Texan is made in the USA once again, proudly handcrafted by Gibson’s finest acoustic luthiers. Featuring all solid woods, X-bracing,and a 25.5” scale length for a powerful tone, Epiphone Made in USA is available in Antique Natural and Vintage Sunburst.

Comprised of Epiphone’s most iconic acoustic guitars from the 1960s the new Epiphone Masterbilt Original Collection is built overseas with old-world techniques and includes the Texan, Frontier, and Excellente. Epiphone Masterbilt Acoustics look and play beautifully at an accessible price point.

“The legacy of Epiphone is long and stellar. Think of it: nearly a century and a half of building some of the most beloved guitars over that history,” says Alex Lifeson. “I recall with great satisfaction, Keith Richards’s Casino as well as John Lennon’s and George Harrison’s, and the unique tone of Jack Casady’s bass. I’m delighted to be back in the Epiphone stable with my own Signature model that provides a solid platform for any guitarist’s needs.”

“In my teens, I had a guitar-playing friend who had an Epi. This was my first encounter with the brand and his guitar played and sounded so much better than mine,” says Vivian Campbell. “I tried to persuade him to sell it to me, but he knew better. I’ve always been impressed by the quality of Epiphone and lately that impression was very much reinforced when I had the pleasure of working with the company on a replica of my Dio ‘Holy Diver’ Les Paul. The build quality and attention to detail is professional grade and as such, I’ve used the guitars onstage with both Def Leppard and Last In Line many times over the past year.”

“Working with Epiphone is a career highlight- something I never dreamed could be possible when I first became a working musician,” says singer-songwriter, musician Emily Wolfe. “Their guitars allow me to create the sounds I hear in my head and bring me closer to making music that will one day, hopefully, be as classic as the brand itself.”

“Epiphone. It’s more than just a name on a headstock. Epiphone has solidified itself as a legacy and icon in every facet of music creation over the past 150 years,” adds guitarist Jared James Nichols. “Personally, in my career, Epiphone has been with me every step of the way. To see the 2020 re-launch and revitalization to this historic brand is beyond exciting. Heritage, quality, and tone, Epiphone is back on top!”

Other debuts include the Epiphone UpTown KatTM ES Collection, the next generation of Epiphone’s critically acclaimed ES-style archtop, the Les Paul and SG Muse Collection addressing beginner and advanced players in new finishes with modern features appealing to women and men. No matter what stage in the journey the player finds themselves, Epiphone has a model and price point to meet their needs.

Where to buy: Epiphone Guitars | Amazon

For over 140 years, Epiphone has been a leading innovator in instrument design with models like the Casino, the Texan and Masterbilt Century Archtop Collection. Epiphone began as the “House of Stathopoulo” family business in Sparta in the 1870s and rose to fame during the jazz age in Manhattan before joining Gibson brands in 1957. Today, Epiphone continues to make history from its headquarters in Nashville, TN. Epiphones have powered classic recordings by Les Paul, The Beatles, and The Rolling Stones along with today’s top artists like Peter Frampton, Gary Clark Jr, Tommy Thayer of KISS and Lzzy Hale. Epiphone offers innovation, history, and a lifetime guarantee. At Epiphone we’re designers, players, mavericks and we’re passionate about everything we do.