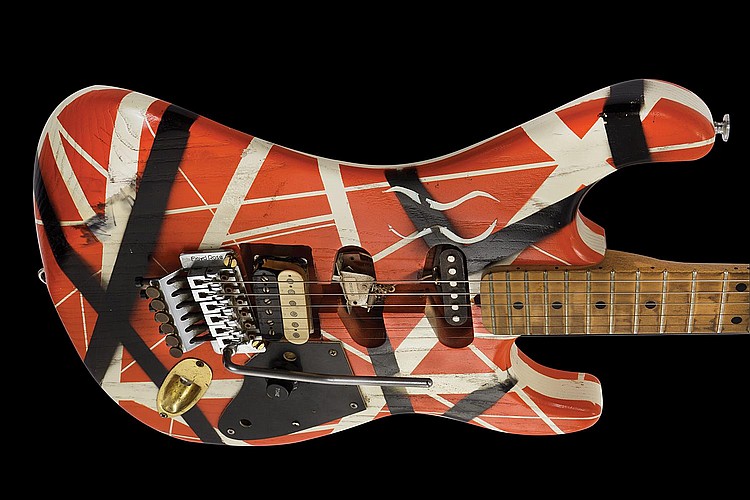 A portion of the proceeds from this lot will benefit guitarist Jason Becker and the Jason Becker Special Needs Trust to assist him and his family in his battle against ALS (Lou Gehrig’s Disease).

This 1982 Kramer “Frankenstrat” guitar was owned and played by the legendary Edward Van Halen during some of the most remarkable years of his career with Van Halen. This guitar was made in 1982 by master guitar builder Paul Unkert and represents one of the original 8 guitars built by Unkert under Kramer for Eddie Van Halen upon his signing with Kramer Guitar Company in 1982. Until the relationship with Kramer, Eddie played his own hand-built “Frankenstein”, which was his attempt to combine the classic sound of a Gibson guitar with the physical attributes of a Fender guitar. The “Frankenstrat” takes its name from a combination of “Frankenstein” (whose creature was also made of various parts) and Stratocaster after the Fender electric guitar. The body is hand-painted in masked layers of white with red and black shapes on body and head stock. The natural wood neck was made ultra-thin to Van Halen’s specifications. The guitar was signed by Eddie on the headstock in 1984 during rehearsals for the “1984” tour at Zoetrope Studios. 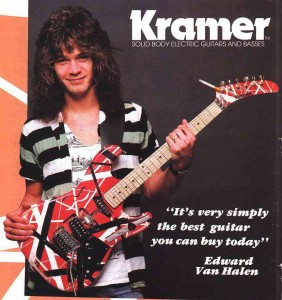 This particular guitar has been used in live performances for the “Diver Down Tour” 1982-1983 as well as in the recording studio in 1984 for one of Van Halen’s most successful albums, “1984,” which included the songs, “Jump”, “Panama”, “I’ll Wait” and “Hot for Teacher.” The “1984” release was the band’s last studio album featuring all the original band members. The guitar is accompanied by an LOA from Rudy Leiren, 10-year, veteran Van Halen guitar tech and longtime friend to Eddie, verifying the guitar’s authenticity and history with Eddie. Rudy states that it is very unusual for Eddie Van Halen to part with a guitar once he has used it for either live performance or recording. Also included is an LOA and video from the original guitar builder, Paul Unkert, who was in charge of building all artist guitars for Eddie Van Halen during the 1982 relationship between Eddie and Kramer Guitar Company. Unkert verifies that, with the exception of the string tree placed on the headstock behind the Floyd Rose nut clamp, and a missing aluminum strap button replaced with eyehooks (by either Eddie or his tech), every detail of the instrument’s condition coincides with when it was built in 1982. This guitar was recently featured in the book, The Guitar Collection: Solid Body ’54 Edition, Published by Epic Ink, 2011, which contains 150 of the world’s most famous guitars including those of Jimi Hendrix, Buddy Holly, Elvis Presley, Eric Clapton, George Harrison and others. A portion of the proceeds from this lot will benefit guitarist Jason Becker and the Jason Becker Special Needs Trust to assist him and his family in his battle against ALS (Lou Gehrig’s Disease). An iconic and extremely well-documented guitar from a true virtuoso in the art. Special shipping arrangements will apply.