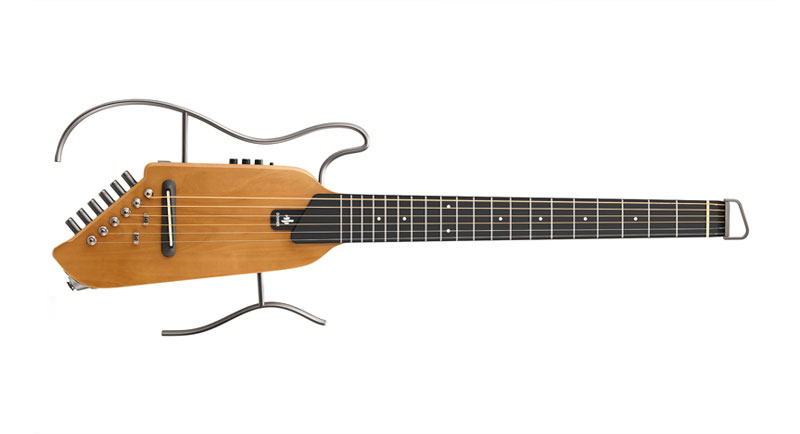 Donner, leading manufacturer of innovative and feature-rich musical instruments, has released its new HUSH-I Silent Guitar, an ideal instrument for both beginners and gigging players alike. Whether practicing at home or on the road, the HUSH-I features a graduated asymmetrical C-shape neck with a headless design that offers beginning players the ability to easily access frets. The HUSH-I’s detachable body lets players take their guitar with them anywhere.

IT’S NEVER BEEN EASIER TO PLAY
Despite the Hush-I’s lightweight design, the guitar features an original wood body which produces superior resonance with warm and full tone. The guitar’s less angular body shape prevents collision damage, always keeping the guitar in tip-top shape and perfect for gigging performers who travel a lot. A traditional headstock can easily be hit or bumped, resulting in the guitar falling out of tune and even creating damage to the headstock. With this guitar, Donner has moved the tuners to the bottom of the HUSH-I’s body, reducing the risk to the headstock and the guitar falling out of tune. For those guitar players who enjoy a more traditional look, the upper and lower frames are removable, allowing players to convert the HUSH-I into a traditionally shaped guitar.

Taking its unique design one step further, HUSH-I features a neck and tuning key that is hidden in the body of the guitar using an anti-drop magnet design, so players never need to worry about losing this important accessory ever again.

THE SUPERIOR PRACTICE COMPANION
The HUSH-I guitar comes with a preamp which features a two-stage EQ, volume knob, headphone output and a 6.35 port — all powered by an outfitted 9-volt battery. A piezo pickup under the saddle doesn’t require a battery.

PERFECTION IN THE DETAILS
The HUSH-I features several best-in-class features that allow guitarists to get the most out of their instrument.

While acoustic guitars are prone to feedback due to the excessive gain of external equipment — such as speakers or P.A.s — the anti-phase button installed on the HUSH-I inverts the output signal by 180 degrees, therefore eliminating feedback and giving the guitar a purer sound.

With the HUSH-I’s two-stage EQ and volume knobs, guitarists can fine-tune their tone no matter if they are strumming chords for a vocalist or playing a hair-raising guitar solo.

For beginning players, the customized round frets prevent finger cuts while playing, and the guitar comes complete with a 2-in-1 guitar strap with quick release buckle that works on both the guitar and the guitar’s bag.

The HUSH-I is now available at donnerdeal.com and on Amazon Marketplace.

Since 2012, Donner has been committed to creating innovative, enjoyable and aesthetically pleasing musical instruments to both entry-level and advanced musicians. This mission is what drove Donner to pioneer its mini pedals, which have brought the joy of musical performance to people across the world. Relying on a strong R&D team, Donner’s musical instruments deliver the reflections , ideas and values of the musician.