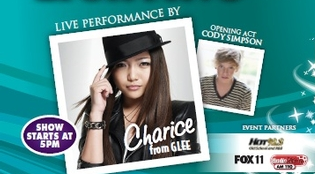 It’s the best of holidays again in Southern California! And Charice will bring another Yuletide Cheer at a Christmas Tree lighting event, this time at the annual Christmas Tree Lighting at The Grove LA, a popular celebrity hotspot, on Sunday, November 21 at 7:30 pm. She will appear with American Idol runner-up David Archuleta and pop/R&B singer Jesse McCartney who co-wrote the hit song ‘Bleeding Love’ for Leona Lewis.

This said event will be hosted by Mario Lopez, a former teenage heartthrob on the popular show ‘Saved By The Bell’ and  the current host for “Extra,” the second longest running entertainment magazine on television.

Meanwhile, on  its 17th season on television, “Extra” is filmed daily at The Grove, the official celebrity retail stomping ground. And Mario will stage and talk with the elite stars and you would never know who will pop up – from Jennifer Lopez to Katy Perry and Miley Cyrus. Many special musical guests and performances will be featured on The Grove stage. 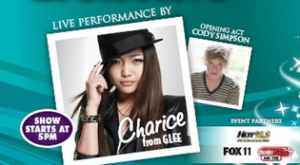 ‘Glee’: ‘The Substitute’–Charice answers questions about her return

After Charice Pempengco’s name was left off the press release for episodes six and seven, fans became upset about her extended absence from the show. She made her debut as Sunshine Corazon during episode one, but the 18-year-old has yet to resurface in her new television role.

Charice has remained silent about her return to the show, encouraging her fans to watch all episodes. But a mass of loyal “Chasters” has relentlessly been pursuing the truth about her return, searching for clues on the internet.

Charice has finally responded to a direct question about the upcoming Gwyneth Paltrow episode. On Wednesday, a fan asked Charice: “Are you gonna be in #glee Episode 7: The Substitute?”

The young singer simply responded: “Nope.”
Are you disappointed about waiting yet another week for Charice? Leave comments below and don’t forget to follow me on Twitter.

Bring a new, unwrapped toy valued at $10 or more to the Tree Lighting Grand Opening event to benefit Toys for Tots and you’ll receive a $25 Good Neighbor Pharmacy Gift Card. See information below for specific details.