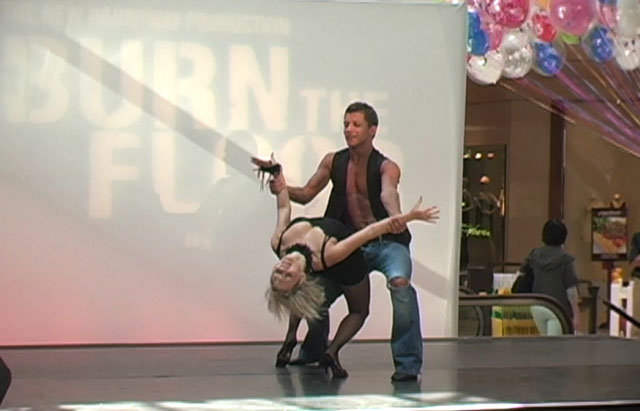 Segerstrom Center and South Coast Plaza continue their noon-time mini-concerts to preview hit broadway shows that are at Segerstrom. This Wednesday at 1:00 featured the ballroom dancing hit, Burn the Floor. A singer from the show, Peter Saul-Blewden, did a smashing job of emceeing this event. The dancers opened with “History”, then went on to “Rollin’ on the River” and later in the program held a Cha Cha dancing lesson and contest for the audience.

I had an opportunity to chat briefly with the dashing Peter Saul-Blewden and lovely Sarah Soriano after the show. Sarah has been with the show for nine and a half years as a dancer but has recently retired her shoes for a coreographic role after she became happily expecting. Peter joined Burn the Floor 9 months ago and has been touring that complete time except for a 2 week intermission when he vacationed with friends in a cabin in Big Bear, California, where he experienced a frigid swim in the alpine waters. Having performed in several musicals including Les Mis, Peter plans to pursue more pure acting gigs after the production company winds down later this year.

After the show concludes its engagement in Costa Mesa, CA on June 12, they move on to Belgium, The Netherlands, South Africa and Australia before landing back in the UK where the show originated.

This is a great place to break the work week with a mini concert. Segerstrom Center plans to continue this free concert series to promote upcoming events. If you are in the area, be sure to stop by, and stay tuned to mikesgig.com for future dates of free concerts in your area.