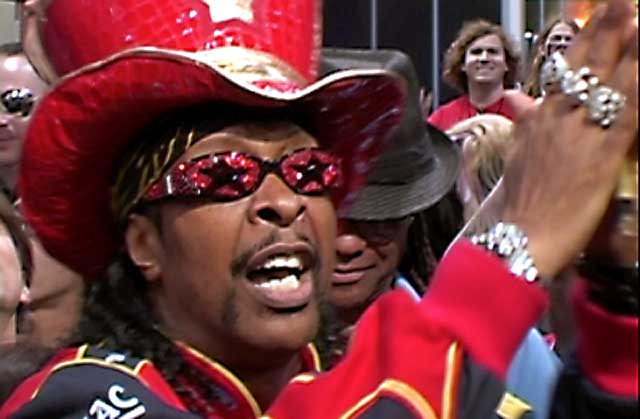 2011 NAMM show and they pulled out all the stops on the last day. Bootsy Collins, TM Stevens started laying down a groove and Divinity Roxx, Delmar Brown on keyboard

This was a rockin’ 2011 NAMM show and they pulled out all the stops on the last day. It was late afternoon and I was making my last rounds, turned a corner to find Bootsy setting up for an autograph session at the Warwick Bass booth. Then the magic happened.

TM Stevens started laying down a groove and Divinity Roxx, Delmar Brown on keyboard and others joined in. Bootsy dropped his pen and got down with this cool impromptu jam. MIke was able to squeeze into a good shooting position and here it is.

The strings on TM Stevens Signature “Zooloo Warrior” Warwick are a new product introduced this year by DR strings called DR NEONs™. They look spectacular under a black light and are available for bass and guitar. You can expect to see them everywhere in the coming years.

Of course Bootsy plays the Warwick Bootsy Collins Infinity Signature Bass (not shown here). But that’s a story for another day. Bootsy is an incessant showman and really knows how to stir the crowd.

Please leave a comment below to identify the other players in this clip.

His Bio. (General info  and wikipedia)

Rising to prominence with James Brown in the late 1960s, and with Parliament-Funkadelic in the ’70s, Collins’s driving bass guitar and humorous vocals established him as one of the leading names in funk.  Collins is a member of the Rock and Roll Hall of Fame, inducted in 1997 with fifteen other members of Parliament-Funkadelic.

In 1984, Bootsy collaborated with Jerry Harrison of Talking Heads to produce “Five Minutes”, a dance record sampled and edited from Ronald Reagan’s infamous “Five Minutes” speech. The record was credited to “Bonzo goes to Washington” (also referenced in the 1985 Ramones song “”Bonzo goes to Bitburg””, derived from Reagan’s starring role as Professor Peter Boyd in the 1951 comedy film Bedtime for Bonzo).

In 1990, Bootsy collaborated with Deee-Lite on their massive hit “Groove Is in the Heart” where he contributed additional vocals. Although he also appeared in the music video playing the bass, the bassline in the song is actually a sample of a Herbie Hancock song called “Bring Down the Birds”. Bootsy’s Rubber Band became the defacto backing musicians for Deee-Lite during a world tour.

Bootsy collaborated with bluegrass legends Del McCoury, Doc Watson and Mac Wiseman to form the GrooveGrass Boyz. They produced a fusion ofbluegrass and funk that listeners either loved as a fresh take on tradition or hated as defiling that same tradition.