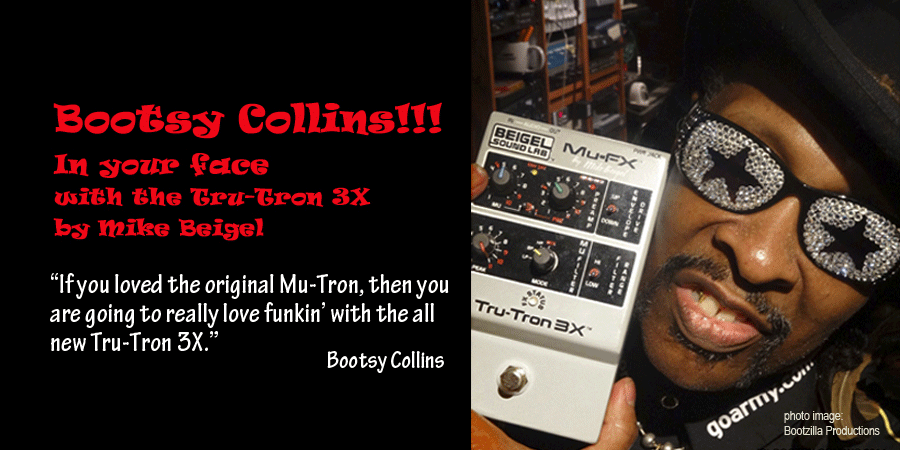 “If you loved the original ‘Mutron’, then you are going to really love funkin’ with the all new ‘Tru-Tron 3X’,” says Bootsy Collins.

“If you loved the original ‘Mutron’, then you are going to really love funkin’ with the all new ‘Tru-Tron 3X’,” says Bootsy Collins. 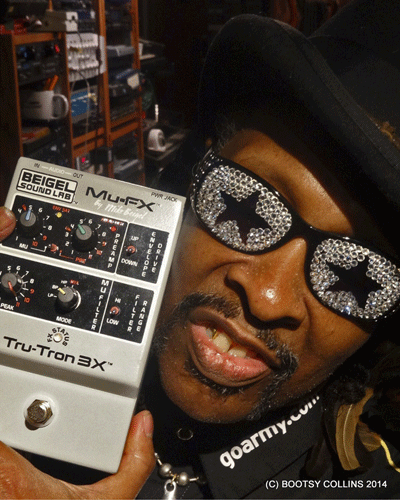 This year will find bassist/singer/bandleader Bootsy Collins performing “Tha Funk Capitol of the World” across the US, France and China with his new Tru-Tron 3X. Bootsy is a living legend not only for his captivating stage persona but also for his fiery funk chops and revolutionary use of effects like distortion, delay and envelope filters on bass guitar.

“Okay Funkateers, if you loved the original ‘Mutron’, then you are going to really love funkin’ with the all new ‘Tru-Tron 3X’,” says Bootsy Collins. “Why is it so much like the OG-Mutron? Because the OG maker of the original is doing the Dirty work on the ‘Tru-Tron’.”

“My motto is: Don’t Fake the Funk or your Nose will Grow.

Better get the real deal & stay away from the Dill-Doe!

Grammy Award recipient (2002) and Rock and Roll Hall of Fame inductee (1997), Bootsy gained prominence with the James Brown band in the late 1960’s when still in his teens. He went on to define funk bass grooves and sounds with George Clinton, Parliament Funkadelic, P-Funk and also fronted his own band, Bootsy’s Rubber Band. An important part of his signature sound was the “synth-like” and “auto-wah” effects created with the Musitronics Corp. (1972) Mutron III. In addition to his continual recording, touring and producing, Bootsy created the Bootsy Collins Foundaton in 1999 to “…allow kids of all backgrounds to be able to come together and learn how to work together like we had to as a band.”

Envelope controlled filters have been used by musicians since 1972 when Mike Beigel invented and patented the circuitry and form of the now-familiar product. We are accustomed to thinking of them, and using them, as ‘automatic wah-wah pedals’. In the same way that a simple bandpass filter can be turned into a complex – and very versatile parametric equalizer, so the system elements of an Envelope Controlled Filter can be expanded in form and function to provide a very sophisticated musical effects processor.

The Tru-Tron 3X™ is the authorized modern all-analog re-issue and refinement of the classic Mu-Tron III™ envelope controlled filter that Bootsy used on stage and in the studio from the 70’s on. Today, Bootsy uses the Tru-Tron 3X because it has the same soul with added features for more funk. Mike Beigel, inventor/designer of the Mu-Tron III™ and co-founder of Musitronics Corp., has retained all the sonic mojo that made the 1972 unit so popular with Stevie Wonder, Jerry Garcia, Bootsy Collins, Larry Coryell, Frank Zappa, Carlos Santana, Joe Zawinul, George Duke and many more.

The new Tru-Tron 3X has been designed as an upgrade to the Mutron III with the following features:

Get Your Funk On Now!