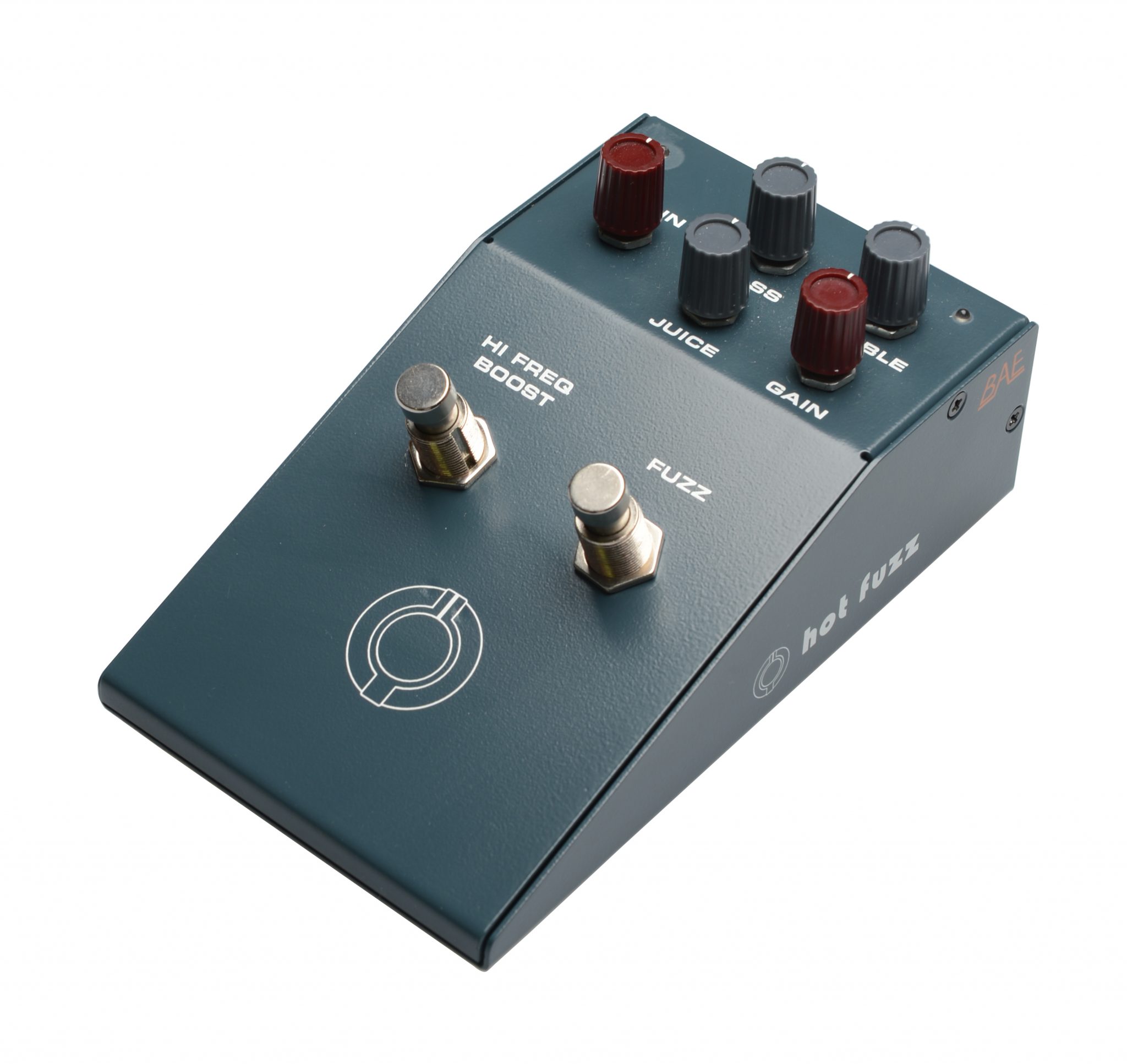 Guitarist Nick Maybury has spent a lot of time on the road lately. The Australian-born Los Angeles native, who has worked with artists such as Perry Farrell, Scott Weiland & the Wildabouts, Michelle Branch, and Mike Posner, recently wrapped up an ambitious tour schedule for 2016. “I’ve done four international tours with three different artists this year alone, so yeah, I’ve been busy,” he says. When Maybury landed back in Los Angeles for the fall, he received a call from BAE Audio’s John Daniel Christiansen. “They wanted to me to come check out their new pedal called the Hot Fuzz, and I thought ‘Wow, these guys who make high end studio gear made a fuzz pedal? I definitely want to check that out’.” And with that Maybury grabbed a few of his favorite guitars and a trusty vintage amp and drove over to Bedrock LA studios for a test drive.

The Hot Fuzz combines a top boost and fuzz section into a single stompbox, and Maybury knew before he even plugged in his Les Paul that there would be extensive variety of possible tones. “I’m a big fan of the Dallas Rangemaster top boost, so combining that in a single pedal with a Colorsound-style fuzz will definitely give you a lot of different tones,” he says. “It’s a really cool idea, I’m heaps into it.” The idea for the pedal was inspired by BAE Audio President Mark Loughman’s quest for the perfect 70s fuzz tone like that heard on the Isley Brothers version of ‘Summer Breeze.’ Finally arriving at the exact circuit he desired after copious research and sourcing just the right components, Loughman and his team are making their first entre into the world of boutique guitar effects. Now putting his creation into the hands of top guitarists like Maybury, Loughman and his team get to bear witness to what this pedal can really do.

Kicking on both footswitches, Maybury digs into some heavy riffs on his Les Paul and the Hot Fuzz roarswith a deep bottom end and an in-your-face top end crunch. Switching over to a vintage guitar Maybury describes as his “fuzz guitar,” he kicks right into the opening riff of the Stone Temple Pilots song ‘Unglued.’ The Hot Fuzz responds to the slightly lower output of this guitar as compared to the Les Paul by tightening up, while retaining its heaviness. “I consider myself someone who’s equally comfortable with lead and rhythm work, and I like that the Hot Fuzz can give you all these different tones.” Shifting gears again to a lap steel, Maybury demonstrates the tonal spectrum of the Hot Fuzz, ranging from a saturated clean with just a hint of edginess at the lowest volume settings on his guitar up to a raging, singing lead with the volume maxed out. “There are some really cool sounds when you’ve got the volume about halfway or a little more, aggressive but still kind of controlled,” he says. “The whole range of tones is really usable.”

The interaction between the top boost and fuzz is key for Maybury. “It’s cool because what the boost does is scoops some of the low end out of the fuzz and gives you a bit more definition and bite in the upper mids, so if you want a growlier, defined riff fuzz, kicking the boost on was perfect,” he explains. “But if you want something sludgy and more bass-heavy, it does that really well with the treble boost off.” As a guitarist who brings together the blues-rock vocabulary of Jeff Beck, Jimi Hendrix, and Jimmy Page and the unique sensibilities of Robert Fripp and Brian Eno, the versatile Hot Fuzz manages to inspire Maybury on many levels. “The Hot Fuzz brings out the raw dog in me for sure,” he says. “It totally fits perfectly with the stuff I’m doing with my own trio, which I’m really excited about.”

Walking out of the test session with a Hot Fuzz of his own, Maybury wasted no time in putting it to the real test: a live show. “I took it with me straight to a house band gig that I have at The Sayers Club in Hollywood,” Maybury said. “We were playing a Jack White track and it was perfect for that, and I also used it on a Dead Sara tune.” It’s good for grunge, it’s good for blues, and it’s good for stoner rock stuff too.” With more road shows coming up, Maybury is certain that the Hot Fuzz will be hitting the trails with him. “I’m definitely going to take it out on the road,” he says. “I’ve got a show coming up with Frankie Perez that I can definitely see using it for. I’ve already used it for every gig since I got it and the thing’s built like a tank.” As to whether there’s room on his crowded pedalboard for another fuzz, Maybury puts its succinctly: “If it’s got the tone, it looks good, and it feels good, there’s always room. And the Hot Fuzz has got it all.”