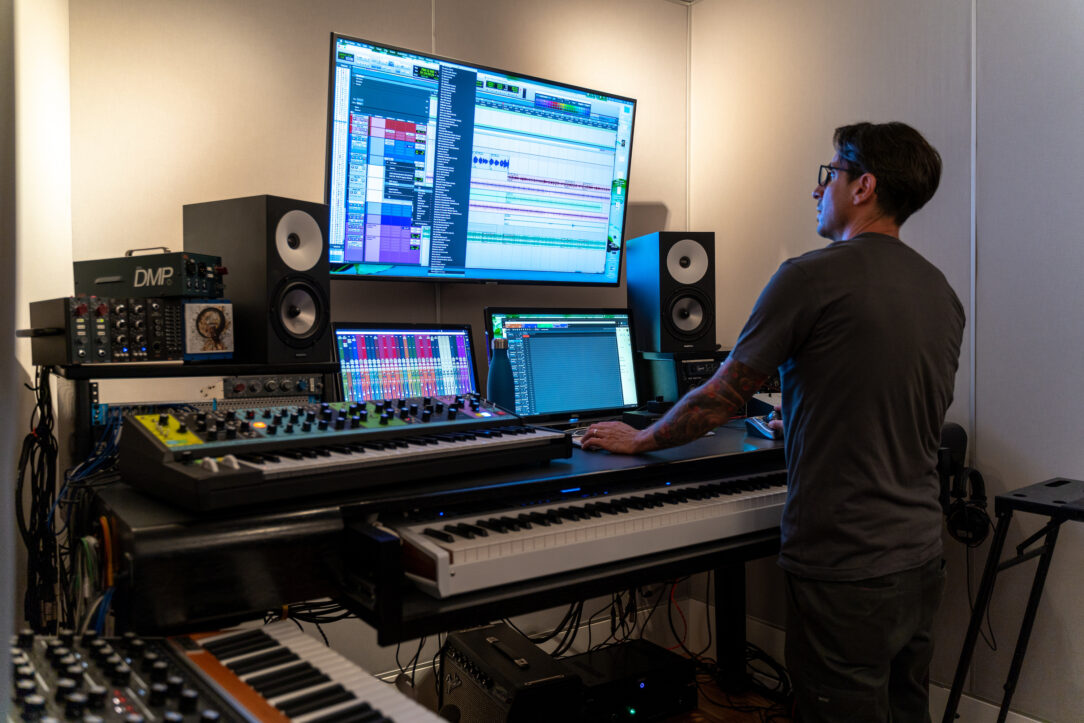 While you may not have heard of composer, arranger and sound designer Luis Guerra, you have surely heard his work. As the musical director and composer behind Malcolm Gladwell’s “Revisionist History” podcast — which is pushing 150 million subscriptions — and other high-profile work on the Freakonomics radio network and Netflix, Guerra has carved out a lucrative niche as a musical ‘storyteller’. At the input stage, he depends on BAE Audio’s 1073 MPL preamplifier and B15 500 series equalizer.

“My studio is set up to characterize what people are trying to do through their stories, film and TV,” he explains. “It is all about vibe, I am not writing songs, and I work at a very high volume, high pace, fast turnaround model.” As such, his signal chain has to produce ultra-high-quality audio every time, without fail.  Guerra has a ‘hybrid composition’ studio in which no more than two performers will be recording at a given time. “So the studio that I have is versatile and is built around that,” he says. “Once you plug something in, the audio has to sound great from start to finish. If I am having a bad day on the instruments, that’s on me and not the gear. But the gear has to work and do exactly what it’s supposed to do.”

From the circus in Santa Fe to the ‘real world’ in LAPerhaps serendipitously, Guerra got his start in Santa Fe where friends of him were throwing a circus and asked him write the music, which he did. After the show, an older gentleman — who turned out to be Gerald Fried — came up to him complimenting him on his music and asking “‘Why aren’t you in LA?”. Since then, Guerra has built a solid foundation of work. Five years ago, he was recruited by Malcolm Gladwell’s ‘Revisionist History’ podcast and has since built an impressive musical bed for program. He has also worked on a prominent documentary on Netflix called “The Art of Conflict” and has made various musical contributions to the Freakonomics radio program. These successes and others have catapulted him to a new position in the competitive world of LA composers: “Now, in the last 4-5 years, people have been seeking me out to do specific things based on the cool projects and associations I’ve made.”

Guerra is a multi-instrumentalist whose main instrument is a double bass. While he is an accomplished arranger and proficient on many instruments, he has used the Moog One synthesizer as one of his primary musical ‘sketch pads. He runs the stereo outs of his Moog One directly into the BAE 1073 MPL and B15 equalizer: “The game changed for me when I started sending out cues using my Moog into my BAE 1073 chain. Suddenly people became really interested in what I was doing.”

“The Moog already sounds amazing, but after it hits these BAE 1073s and it is just so warm and juicy,” he effuses. “The transients and the gain-staging all sound great. Also with the B15, I can shelve the hi hat a little bit, or if I want a little more growl in the midrange I can dial that in or notch out a problem in low 200 Hz or 250 Hz. It’s all about workflow for me. You are trying to capture your ideas before they escape your brain.”

BAE and the audio advantageGenerally speaking, Guerra uses the DAW only as a tape machine and for MIDI sequencing. Before any audio signal ever reaches the DAW, it is already in a pristine state thanks to his BAE 1073 and B15. “I don’t have to put a plug in or compressor or anything once I am in Pro Tools because it already sounds awesome,” he says. “If I need MIDI, then I am using it as a sequencer.” Guerra says that at any given time, he will be recording and mixing approximately three pieces of music per day. “I have to always be working on a ton of music to hit my schedules, and it has to sound great without any fuss.” To that end, he says that his BAE kit makes an audible difference: “When I deliver a mockup or a demo, people often say ‘That’s sounds great, can we use it?’ when I just intended it to be an idea! Had I known this 20 years ago, I would have invested in the BAE gear a long time ago because it has given me a real competitive advantage.”

Interestingly, Guerra was never seeking out his BAE gear. “I just kept seeing the BAE stuff all around LA,” he recalls. “So many people were using it — both in their garages and home studios, but in all the high end studios too. It just sounds awesome. With the BAE stuff, I literally plug it in and it sounds legit.”