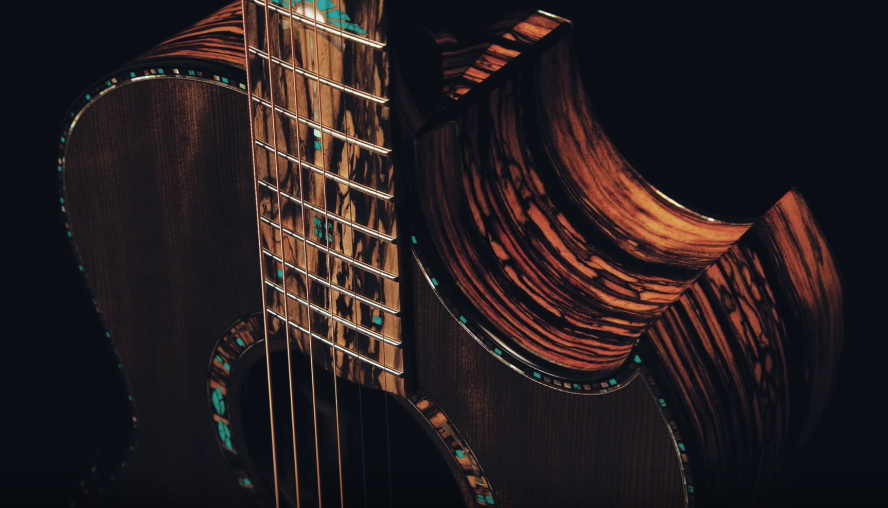 The crowning jewel of this anniversary collection is the 1,000th guitar produced at Ryan Guitars over its 30-year history. The back and sides of this luthiery work of art are crafted from ultra-rare pale moon ebony, and the Sitka Spruce soundboard is built from logs found in the frozen tundra of Alaska that have been carbon-dated at nearly 3,000 years old.

All 30th anniversary guitars begin with a submersion redwood soundboard. These rare tops were salvaged from redwood trees lost to alpine logging rivers for several hundred years. As a result of contact with cold, mineral-rich waters, these master grade soundboards display dynamic coloration and provide phenomenal tone and presence. The series’ one-of-a-kind rosette is patterned after the dramatic, angular lines of redwood bark and inlaid with green abalone heart, sourced off California’s coast.

Each edition of our anniversary guitar theme also features:

Mike’s Notes:
Stunning, stunning, stunning! Did I say stunning? Kevin is a master luthier and his No. 1000 is truly a work of playable art. I was not able to play No. 1000, but I did check out the other instruments at his booth and they play and sound as good as they look. If you must have the best and money is of no concern, then Ryan Guitars should be at the top of your list.