US Open of Surfing Huntington Beach

Bands For the 2012 US Open of Surfing Announced 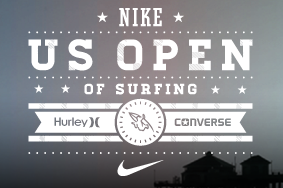 Tv On The Radio, Grouplove, Best Coast, Toro Y Moi, White Arrows, Hindu Pirates and Walk The Moon all join the line up for the biggest and best Free Concert Of The Summer.

The Biggest Beach Event In The World

The Nike US Open of Surfing is held every summer for one week at the end of July/beginning of August in Huntington Beach “Surf City”, California. This once sleepy beach town is now an international destination for vacationers seeking the sun, sand and surfing. HB, as it is referred to by the locals, has both the longest pier and the longest beach on the west coast. The US Open is held on the sand, and in the ocean – after all it is a surfing competition, on the south side of the HB pier.

In the early years it was all about the surfing, but since the mid-90s the huge crowds drawn to the event (upwards of 500,000 expected in 2011) are there for the free concerts and carnival-like atmosphere. It is the biggest party on the West Coast and its all for free.

2011 Nike US Open of Surfing
Schedule

HUNTINGTON BEACH, Calif.–(BUSINESS WIRE)–The 2011 Nike US Open of Surfing has a soundtrack and it will play live on the beach before tens of thousands of fans. The event, owned and produced by IMG, the global leader in sports and entertainment, is taking a cue from its action sports roots, and set to deliver the largest free concert series of the summer.

This year’s musical line-up is a representation of today’s youth culture featuring headlining sets by pysch-pop rockers MGMT, platinum-selling rockers Jimmy Eat World and Swedish electro/rock sensations The Sounds. The series will also include sets by the most buzzed about names emerging on the music scene this year: Surfer Blood and Dead Country. “We’re pretty excited to come to Huntington Beach for the US Open of Surfing. Our advice to everyone: Drop out with MGMT, drop by for MGMT, but just don’t drop in on MGMT,” said MGMT’s Andrew VanWyngarden.

US Open of Surfing Background

The 2011 Nike US Open of Surfing will run from July 30 to August 7. With more than 500,000 people in attendance along a 14-acre stretch of sand on the south side of Huntington Beach Pier, the Nike US Open of Surfing showcases the best in surf, skate, BMX, music, fashion and art. All events at the US Open of Surfing are FREE and OPEN TO THE PUBLIC. Live webcast of all the events can be viewed daily at www.usopenofsurfing.com. Anchored by the world’s largest professional surfing competition, the $460,000 US Open is a pivotal point on the ASP World Tour for both the men and women. The men’s competition will feature a North America ASP Men’s Prime event with valuable points on the line right before the coveted ASP Top 34 rotation. For the women, the US Open of Surfing will host the final event of the 2011 ASP World Title Tour and will potentially crown a women’s world champion in Surf City this summer. In addition to the high-stakes mens and womens divisions, the US Open will feature an ASP Grade Four men’s and women’s Junior Pro as well as the Pacifico Nose Riding Invitational – always a crowd favorite.

The action doesn’t stop at the shoreline. On the beach, Converse Coastal Carnage will once again host the most talented and diverse crew of riders from across the globe as they skate in a state-of-the-art skate bowl. And, a stellar crew of BMX riders will push the realm of possibility at the Nike 6.0 HB BMX Pro. The runway will be busy on Thursday, August 4 as five of the nation’s top high schools will compete for $25,000 in the Hurley Walk the Walk National Championship – the ultimate youth fashion competition.

Combined with one-of-a-kind retail and brand experiences, more than 100 interactive exhibits, autograph signings, DJs and giveaways, and you have another summer to remember at the Nike US Open of Surfing.