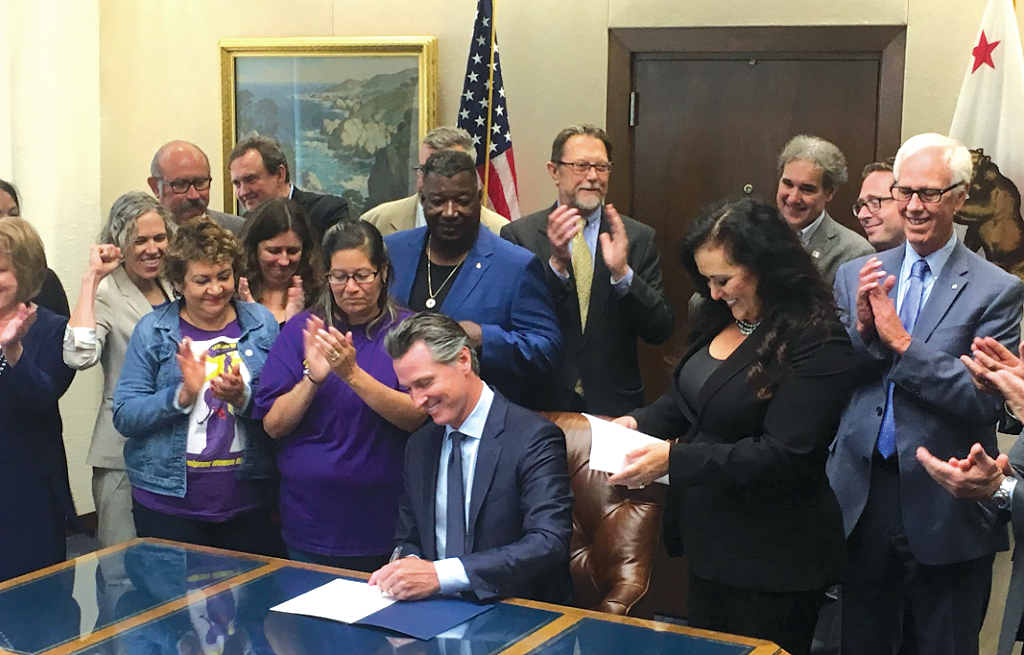 By Music Trades in
5 comments

AB5, aka the “gig worker bill,” was initially designed to address perceived exploitation of Uber, Lyft, and DoorDash drivers by affording them basic labor protections. But by the time it became law in September, the measure had swept up many other participants in the growing gig economy, with far-reaching unintended consequences.

AB5 was crafted to give citizens previously classified as independent contractors minimum wage protection, sick leave, and unemployment and workers’ compensation benefits. Opponents of the law argue that it reflects a profound ignorance of the music industry’s gig economy, that the legal and bureaucratic strings attached to these benefits are patently ill-suited to the informal, often structureless and non-centralized nature of commerce among “non-union music professionals.” It fails to consider the typically isolated, one-off interactions between not only instrumentalists and vocalists but also DJs; club owners; recording, mastering, and live sound engineers; record producers; tour and merchandise managers; etc.

For example, hiring a violinist to play a wedding reception, or a percussionist to accompany a dance recital, would require the “employer” to calculate and withhold taxes. The same would apply to a club owner for every musician hired, even for a single set. Budgets for even casual, ad hoc recording projects would have to be adjusted to account for the estimated 20-30% deducted. Blogger Ari Herstand predicts, “Anyone who pays you to perform may need to hire you as a legal employee of their company in order to do business with you. Anyone you hire may need to be an employee of your company (if you even have a legal entity registered). …If you want to hire a bass player to play your gig for $100, you will have to put that bassist on payroll, pay unemployment taxes, provide benefits, follow labor laws, get workers compensation insurance, deduct taxes, work with a payroll company, [and] W-2 that bassist, as they now legally will be designated your employee.”

AB5’s full enforcement, say opponents, defies reason on both sides of the transaction. “Think of a 14-year-old kid in her bedroom making music with friends,” said a September 4 article in Variety magazine. “Is she capable of becoming an employer and providing punch cards, time sheets, guaranteed meal breaks, health care, retirement benefits, minimum wage, overtime pay calculation, mandatory tax withholdings?” The article goes on to point out that, under AB5, newly designated employers will include: “the young girl in her basement recording on Garageband who invites a friend over to play bass…the rapper who hires a mixer to punch up the levels on the production…the producers in a garage who hire musicians to play on a track…the songwriters who ask people to play on a demo so they can pitch it to an artist to cut …[and] the people who organize ‘song camps’ where songwriters come together and write songs.”

If you want to hire a bass player to play your gig for $100, you will have to put that bassist on payroll, pay unemployment taxes, provide benefits

Assembly Bill 5 was introduced by California Assemblywoman Lorena Gonzalez and signed into law by Governor Gavin Newsom in September 2019. It will take effect January 1, 2020. Compliance and enforcement promise onerous costs and reporting headaches, but the greatest anxiety surrounds the anticipated broader chilling effect on the paid music scene throughout the state. It is feared that, faced with the prospect of lost revenue and monumental administrative requirements, venues will curtail live music activities, and producers will move projects to more work-friendly environments. And while we’re pondering Armageddon, though AB5 is currently only California’s problem, opponents warn that its precedent and successful enactment may be emulated elsewhere.

The legislation’s critics charge that it was rushed through committee, allowing insufficient time for review. A vocal opposition led by the Recording Industry Association of America, the American Association of Independent Music, and the star-studded Music Artists Coalition failed to stop its passage. Since AB5 became law, a grassroots movement comprising local musicians and related industries and organizations has begun a campaign to reverse it, starting with a concerted appeal to state Senators and members of the California Assembly. NAMM is currently working with the California Chamber of Commerce to address the law’s unintended consequences. Mary Luehrsen, NAMM director of public affairs and government relations, commented, “As with all advocacy, it is important that California NAMM members reach out to their state legislators and communicate the real-world business impact of [AB5] as well as its impact on opportunities for music education and community music making.”

5 comments on “New California Law A Nightmare For Musicians”